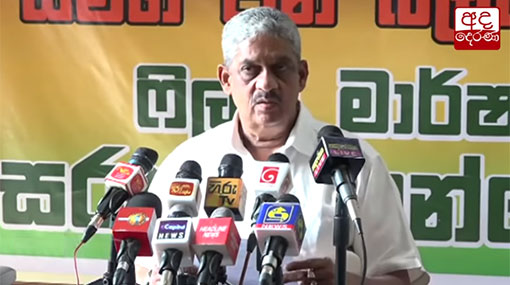 Fonseka says his comment on coronavirus is a mistake

Colombo Crimes Division (CCD) today launched investigations into the controversial statements made to the media by former MPs Rajitha Senaratne and Sarath Fonseka on COVID-19.

Holding media conference today, Fonseka emphasized that his comments were a mistake.

Fonseka said: “I told the media that three persons in the country had succumbed to coronavirus. The media briefing was held on March 16 and this information was circulating on Facebook three days before that. At that time, I had gone to the Gampaha electorate to visit my supporters and on three occasions the had brought this to my attention even before I saw the news. Since it was a public opinion, I felt it could be trusted. Hence, I thought it was true and made the statement. Now it has been reported that the individuals who made the claims are under investigation. But, by 16th we were unaware that such an investigation would happen. I made a mistake, and I am prepared to face the consequences on behalf of the country.”

In the meantime, former Health Minister Rajitha Senaratne had recently made a controversial statement that 10 school students have contracted the virus.

DIG Ajith Rohana, who spoke during the special media briefing of National Operation Centre for Prevention of Covid-19 this evening, said that the police department has received both video clips in question and that the Acting IGP has appointed a special CCD team to investigate the matter.

Meanwhile, the Minister of Health Pavithra Wanniarachchi noted that spreading such false information among the masses is a serious crime.