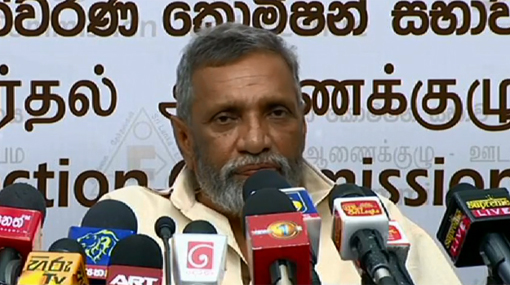 The Election Commission (EC) has decided to postpone the General Election 2020, which was set to be held next month.

Holding a special media briefing at the Election Commission this afternoon (19), its Chairman Mahinda Deshapriya said the General Election will not be held on April 25 as scheduled.

The Election Commission has taken this decision considering the prevailing situation in the country owing to the threats posed by the coronavirus (Covid-19) outbreak.

Deshapriya added that the Election Commission may continue to receive accepted and rejected nomination papers, serial numbers assigned to candidates and the lists of polling stations on March 20 and 21 before noon.

After the gazette on the notice of poll is published the Election Commission is authorized to postpone the election, as per the provisions of Section 24 (3) of Parliament Elections Act (No. 1 of 1981), which states that at the event of any emergency or unforeseen circumstances the election cannot be taken on the day specified in the notice relating to the election.

The Election Commission can accordingly appoint another day for the election. However, Deshapriya pointed out that the new date of the election will be fourteen days after the day on which the election was set to be held.

Accordingly, owing to the coronavirus outbreak in the country, the chairman and the two commissioners of the Election Commission have decided that the General Election 2020 will not be held on April 25.

Deshapriya added that the election calendar for the year 2020 has now upended.

The new election date will be announced on March 26, after holding discussions with the health authorities on the prevailing situation and the means to control the Covid-19 in Sri Lanka, he continued.