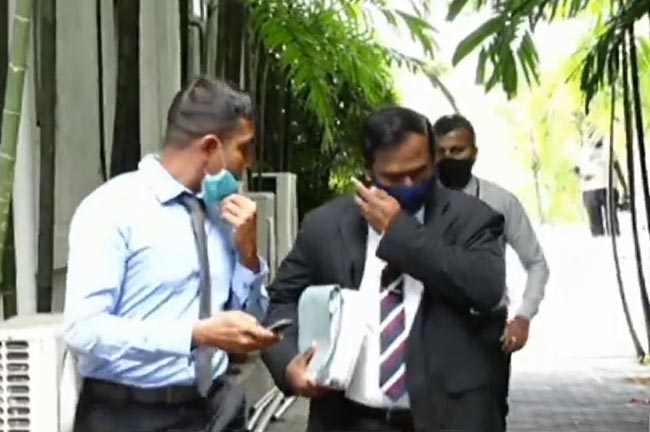 Easter attacks: Zahran and a bomber was at Shangri-La two days prior to attacks

Presidential Commission of Inquiry probing the 2019 Easter Sunday terror attacks heard that Ringleader of the attacks Zahran Hashim and another bomber had engaged in a reconnaissance of the Shangri-La Hotel in Colombo two days prior to the attacks.

The Commission also heard that a room was booked by one of the bombers at the hotel on the 17th of April under a fake name.

Chief Inspector of Police (CIP) of the Criminal Investigations Department (CID) Mahinda Jayasundara who is in charge of the investigations pertaining to the Shangri-La Hotel bombing in the Easter Sunday of last year gave evidence before the Presidential Commission of Inquiry probing the attacks yesterday (22).

He told the Commission that an individual named Mohamed Hamshad had reserved Room 616 of the 6th floor of the Shangri-La Hotel on the 17th April, prior to the attacks.

He added that Mohamed Hamshad is a fake name and the person who came to reserve the room was in fact the Cinnamon Grand Hotel suicide bomber Mohammed Ibrahim Insaf Ahmed.

The Chief Inspector added that both Zahran Hashim and Mohammed Ibrahim Ilham who perpetrated the attack at the Shangri-La Hotel had visited the hotel 2 days prior to the attacks, at around 7.30 am.

He noted that it is possible that the duo had breakfast at the ‘Table One’ restaurant in preparation for the attack.

The witness went on to say that the CCTV footage shows that the duo had then spent several minutes at the hotel lobby before taking a taxi to a building named ‘Lucky Plaza’ in Colpetty.

Zahran had rented a flat on the 5th floor of that building and investigations uncovered fingerprints of Zahran’s sister at the flat.

CIP Jayasundara also said that information pertaining to a van was also uncovered when questioning the building’s security guard.

The witness said that an unidentified person had parked a white van in the building’s car park and when the security guard had enquired about it, the individual in question had driven away. Further investigations have revealed that the van in question is the same van which was subjected to a controlled explosion near the St. Anthony’s Shrine in Kochchikade, a day after the attacks.

The witness added that the next visit of Zahran Hashim and Mohamed Ibrahim Ilham to the Shangri-La Hotel by a taxi was on the 20th of April at 7.56 pm.
The taxi they had used had come from the Paraththa Road in Panadura and the witness said that the duo had brought large traveling bags with them and it was later ascertained that the bags contained explosives.

The hotel’s welcoming officer had told investigators that when a member of the hotel staff offered to take the bags to their room, the duo refused the service.

Investigations have uncovered that Ibrahim Ilham had exited the hotel with a light traveling bag on the night of April 20 and had taken a taxi to the ‘Span Tower’ apartment complex in Mount Lavinia.

It is also revealed that the suspects had rented two flats at the complex between April 12 and 21, 2019, and they were rented by the Kingsbury Hotel bomber.