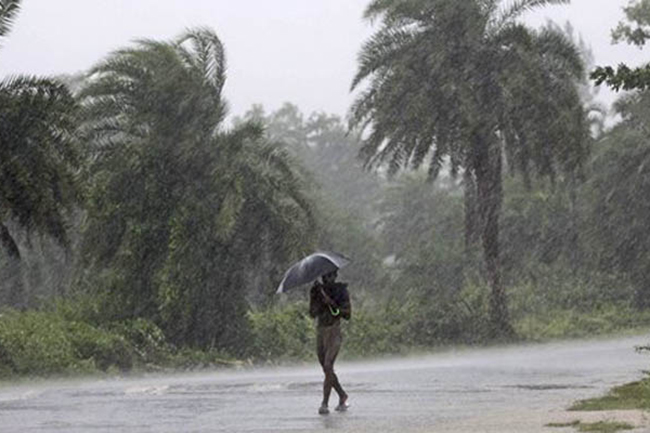 South-west monsoon condition is gradually establishing over the country, the Department of Meteorology has said.

Prevailing showery condition in the Southwestern part of the island is expected to enhance further.

Showers or thundershowers will occur at times in Western, Sabaragamuwa, Central, North-western and southern provinces.

Heavy rainfalls above 150 mm can be expected at some places in Western, Sabaragamuwa and Southern provinces.

Showers or thundershowers may occur at several places in Eastern and Uva provinces and in Polonnaruwa and Mullaitivu districts after 02.00 p.m.

Showers or thundershowers will occur at times in the deep and shallow sea areas extending from Galle to Batticaloa via Hambantota and heavy rainfalls may occur at some places in these sea areas.

Showers or thundershowers may occur at a several places in the sea areas extending from Puttalam to Galle via Colombo.

Winds will be South-westerly and wind speed will be (30-40) kmph in the sea areas around the island.

Wind speed can increase up to (50-55) kmph at times in the deep and shallow sea areas off the coast extending from Puttalam to Kankesanturai via Mannar, and in Galle to Batticaloa via Hambantota.

The deep and shallow sea areas off the coast extending from Galle to Batticaloa via Hambantota and from Puttalam to Kankesanturai via Mannar can be rough at times. The other sea areas around the island can be fairly rough at times.

Naval and fishing communities have been urged to be vigilant in this regard.