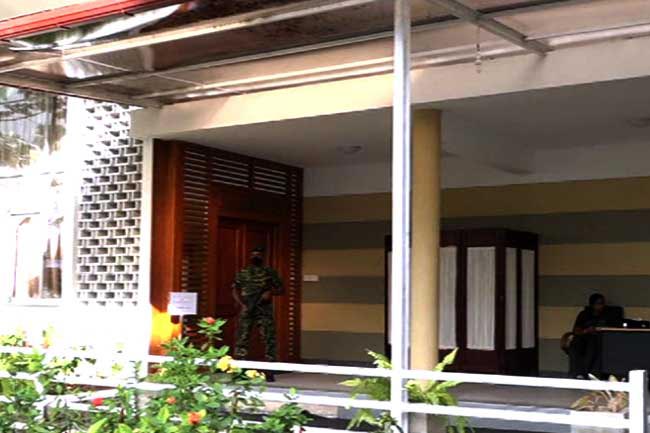 Retired Deputy Inspector of Police (DIG) Keerthi Gajanayake believes that the intelligence information the Inspector General of Police (IGP) received prior to the Easter Sunday terror attacks had been undermined by the IGP himself, with the inclusion of a common phrase used by the police.

Giving evidence before the Presidential Commission of Inquiry probing the Easter attacks, Gajanayake insisted that the phrase ‘For Necessary Action’ should never be included on a document containing valuable information.

Retired Deputy Inspector of Police (DIG) Keerthi Gajanayake who served as the Director of State Intelligence from 2003 to 2011, gave evidence before the Commission today (29).

During the proceedings, the state counsel brought the document containing correspondence of pre-warnings pertaining to the attacks, to the attention of the witness.

The State Council asked the witness as to what is meant by the note ‘Eyes Only’ made by then-National Intelligence Chief Sisira Mendis on the letter sent to the IGP Pujith Jayasunadara. The witness said that a note reading ‘Eyes Only’ is made when a highly secretive piece of information is submitted for the knowledge of a certain person. He added that once the recipient absorbs the contents of the document noted ‘Eyes Only’, it is a must to destroy the said document without letting another person come across it.

The witness went on to say that during his entire service, documents noted ‘Eyes Only’ were only submitted to the President and the Defence Secretary.

He also went on to say that such action from a high-ranking officer such as the IGP cannot be expected.

The Commission asked the witness as to whether the sentence ‘A secret investigation is underway pertaining to the above information’ contained in the document, undermines the initial piece of intelligence information.

The reply of the witness was that by the time this letter was forwarded, the SIS had information of Zahran Hashim and his terror cell’s involvement in defacing of Lord Buddha statues in Mawanella, and the discovery of explosives from Wanathawilluwa.

With a pre-warning issued by a foreign intelligence agency containing the relevant names, he added that the SIS chief had not presented that information and the information which the SIS possessed, coherently.

The witness told the Commission that had SIS Chief Nilantha Jayawardena presented the information coherently, there would have been clear grounds to prevent the Easter Sunday terror attacks.