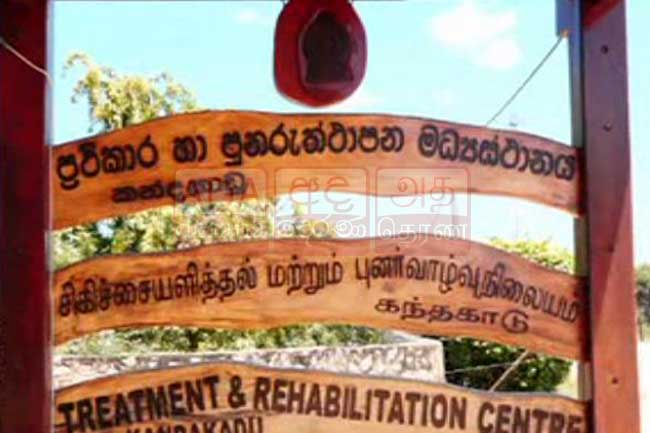 Another counselor from the Kandakadu Treatment and Rehabilitation Centre has tested positive for Covid-19 at Rajanganaya.

Army Commander Lieutenant General Shavendra Silva stated that 300 villagers including 70 children from the area have been placed under self-quarantine.

Clarifying on this further, he said that the patient identified from Rajanganaya had visited the rehabilitation center for counseling duties on July 01 and in the morning the following day he leaves to return back to his post at Anuradhapura.

However, due to a funeral of a relative he travels to Rajanganaya without reporting back to his post. The patient is a resident of Yaya 05 in Rajanganaya while the funeral is held at Yaya 03.

He stated that the counselor and his two children, an 11-year-old and a one-year-old, had tested positive for Covid-19.

The Army Chief said that this 11-year-old child, who is a Grade 5 student, had attended some classes on July 06 and 07 and there are around 70 children in these classes.

He said all these children have already been identified and directed to self-quarantine.

Meanwhile around 150 persons who had attended the aforementioned funeral and all of them have been identified and placed under self-quarantine.

Then on the 06th of July an alms giving ceremony is held at the same funeral house which was attended by another 80 or so persons. They too have been identified and placed under self-quarantine, he said.

Prior to being transferred to the Welikada Prison, the COVID-19 infected prison inmate identified recently had been detained at the Kandakadu Rehabilitation Centre for 03 months.

Accordingly, 450 inmates and staff at the Rehabilitation Center had been subjected to PCR tests.

On Thursday (09), 56 persons from the Kandakadu Treatment and Rehabilitation Centre and a female counselor employed at the center had tested positive for the novel coronavirus.

The female counselor employed at the Kandakadu Rehabilitation Centre had tested positive from the Marawila area, while at home for the holidays.

So far over 340 persons from the rehabilitation center have been infected with the virus.