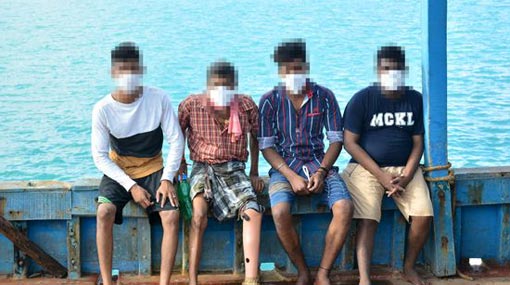 Sri Lanka Navy has apprehended 04 persons have been arrested at the seas north of Thondamannar in Jaffna over an illegal migration operation.

Reportedly, a craft attached to the Northern Naval Command had investigated a dinghy 11 nautical miles off Thondamannar North, when the arrests were made.

Two Sri Lankans on board had been attempting to migrate from India while the other remaining two had crossed International Maritime Boundary Lines to provide transport for the illegal migrants.

The two illegal migrants have been identified as previous residents of Velvetithrai and Mullaitivu areas, stated Sri Lanka Navy.

One among them has been identified as a former LTTE militant and had been admitted to Jaffna Teaching Hospital over COVID-19 symptoms.  He is due to be tested by PCR for COVID-19 today (12), said Sri Lanka Navy. The other migrant, too, is suspected to be an LTTE activist.

The arrested suspects who had not shown symptoms for the novel coronavirus will be held separately until being handed over for further investigations, Sri Lanka Navy said. However, they too are to be subjected to PCR testing.

As precautionary measures under COVID-19 pandemic, the persons and the dinghy have been disinfected as per healthcare instructions.