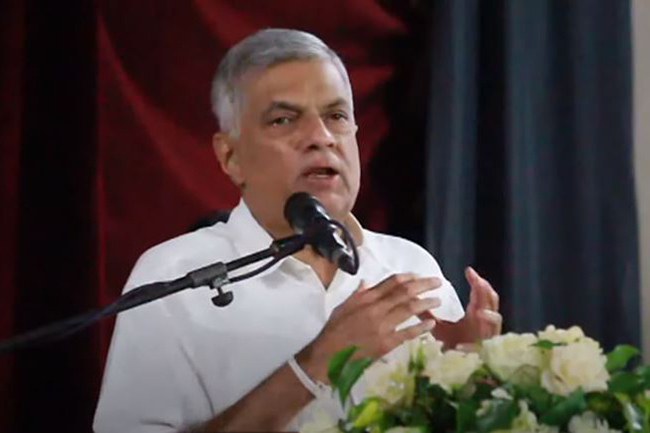 The high court has ruled that the conduct of Samagi Jana Balawegaya (SJB) is an attempt to harm the United National Party (UNP, says the party leader and former Prime Minister Ranil Wickremesinghe.

He made this remark defending the decision taken by the UNPs Working Committee on Tuesday (28) while addressing a public meeting held in Rambukkana.

The UNPs Working Committee on Tuesday (28) approved the suspension of party memberships of 115 members.

It is reported that 54 members who submitted nomination from the Samagi Jana Balawegaya (SJB) and another 61 Local Government members were expelled from the party.

The UNP leader said letters have already been directed to the ousted party members and that their names will be publicized on Wednesday (29).

Wickremesinghe meanwhile insisted that the UNP is the only political party in the country with a Sri Lankan identity.

Speaking at a public gathering, he also stressed that the UNP has also protected the minorities and will continue to do so.

The economic crisis given rise to by the outbreak of COVID-19 pandemic could not be controlled, the UNP leader said adding that USD 7 billion of the countrys foreign exchange was lost and that the government revenue has dropped by 50%.

The country cannot be sustained and this government does not have the strength to do so, the former Premier continued.

Only the United National Party has that strength.

He also said the Muslim and Tamil communities must be protected, stating that he prevented them from being harassed after the blasts.

The UNP is the only political party with a Sri Lankan identity, he said further.