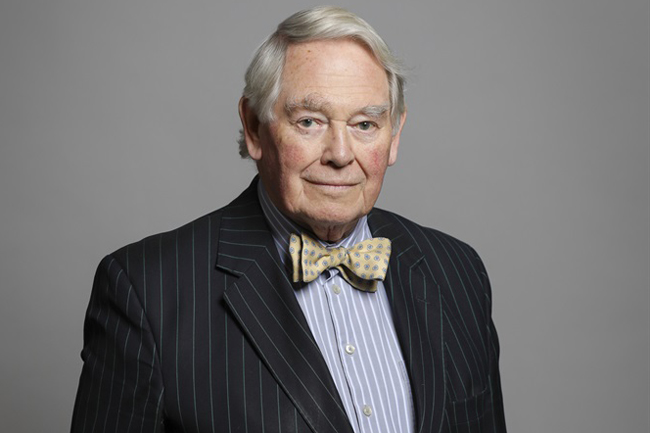 All Party British Sri Lanka Parliamentary Group President Lord Michael Naseby said United Kingdom would face a challenge as Adele Balasingham, who was the arch recruiter and trainer of the now-defunct LTTE’s child soldiers, is still residing comfortably in the UK.

“Still, in this country, we have Mrs. Balasingham, who was the arch recruiter and trainer of the child soldiers, residing comfortably in the United Kingdom. That is a challenge we need to face,” he told the House of Lords on Wednesday.

Lord Naseby becoming hard on the Transnational Government of Tamil Eelam (TGTE) during his remarks at the debate on Global Human Rights Sanctions Regulations 2020 in the House of Lords, explained that the TGTE, which started a legal action in the courts in the UK to lift the proscription on the LTTE, has never shown any remorse over child soldiers.

“My Lords, I have no problem at all with the financial aspects of Sanctions Regulations. I think there is a big challenge with individuals and human rights. I remember Gaddafi, Saddam Hussein and Assad, all of whose communities we interfered in at huge human cost to those communities,” he said.

Lord Naseby said he prefers to focus, though, sadly, on the Sri Lankan Tamil Tigers (LTTE) which the UK proscribed in 2001.

“It was succeeded by the Transnational Government of Tamil Eelam - TGTE - itself proscribed in Sri Lanka. It is staffed and organized by former LTTE people and yesterday it started a legal action in the courts here in the UK to lift the proscription on the Tamil Tigers,” he said.

“The TGTE espouses an ideology which is almost identical to that of the LTTE, it has never denounced violence or the terrorism of the LTTE, it disseminates propaganda worldwide, targeting young people, mainly Tamils, with commemorative events, waving LTTE flags and the black tiger, et cetera,” Lord Naseby said “Worst of all, I think, it has never shown any remorse over child soldiers. UNICEF stated on 31 July 2005 that 5,081 under-aged soldiers were recruited, 40% girls and 60% boys, and at the end of the war, 594 was the small number that was left.”