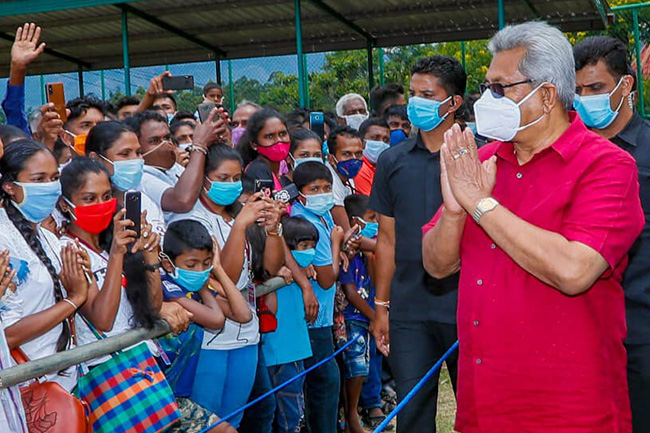 Will not abandon quest to eradicate poverty  President

President Gotabaya Rajapaksa has guaranteed that his quest to eradicate poverty will not be abandoned.

Speaking at a public gathering in Badulla today (01), he noted that despite job opportunities for some in the past poor were left behind, the President’s Media Division (PMD) said.

President Rajapaksa assured that he will honour every promise in his policy framework “Vistas of Prosperity and Splendour” and following the general election, promising that 150,000 job appointments for underprivileged and graduates will be granted.

In addition, the President also revealed a plan to provide employment for students who had succeeded in Ordinary Level and Advanced Level examinations following a satisfactory training program.

President made these remarks at Mahaweli playground, Mahiyangana during the election tour in the Badulla district in support of the Sri Lanka Podujana Peramuna candidates in the Wednesday’s general election, the PMD added.

The President has stated that every time a patriotic leader is elected to the highest office in the country, eventually conspirators and extremists would emerge to sabotage his/her policies and vision.

The President meanwhile assured provisions from the annual budget to resolve the shortage of drinking water in several districts.

“During my tour across the country in the last 2-3 weeks, one of the major issues I was presented by the people is the scarcity of drinking water. This issue was discussed with the Prime Minister Mahinda Rajapaksa as well. Lack of drinking water is an issue which needs immediate attention and plans have been set in motion to address it” President added.

President Rajapaksa made these remarks during his campaign tour of the Badulla district today.

President participated in the public rally organized at the playground in close vicinity to Dowa Rajamaha Vihara, Bandarawela and assured the crowd that he would take steps to resolve issues faced by the people in the Badulla district.

“I would implement a proper plan to permanently resolve the elephant intrusions and shortage of water supply for irrigation in the area.” President assured, during another campaign rally. He added that he would take steps to return inherited lands for cultivation purposes. President stated that he would examine each and every issue in order to successfully combat poverty and uplift the lives of the people under a proper strategy.