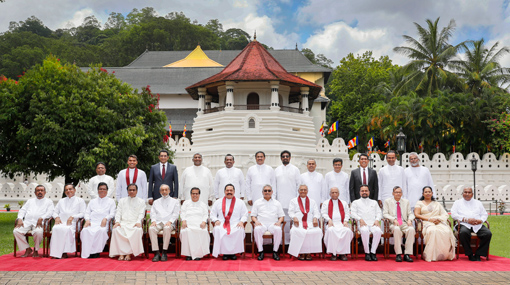 The Cabinet of Ministers and State Ministers of the new Government led by Sri Lanka Podujana Peramuna (SLPP) were sworn in before President Gotabaya Rajapaksa.

The swearing in ceremony was held at the MagulMaduwa (Audience Hall) of the historic Temple of the Sacred Tooth Relic premises in Kandy this morning (12).

The President has repeatedly stressed the requirement of an efficient Cabinet of Ministers dedicated to build a prosperous nation in the future, says the President’s Media Division (PMD).

According to “Saubhagyaye Dekma” (Vistas of Prosperity and Splendour), policy statement the composition of the Cabinet has been formulated in a pragmatic and a realistic manner to implement the national programme. Special attention was paid to the areas of national security, economic development, infrastructure facilities, education, health and sports in the process of formulation of the ministerial structure.

The new Cabinet of Ministers comprised 25 Ministers including the Prime Minister. There are 39 State Ministers. 23 Members of Parliament have been appointed as District Coordinating Committee Chairmen.