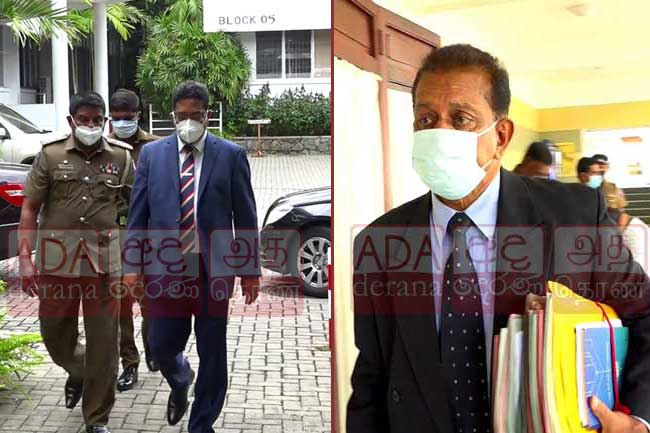 During their individual testimonies, the subject of whose responsibility it was to take up the foreign intelligence warning of an imminent attack and the intelligence coordination meetings chaired by the Defence Secretary were disputed by both parties.

Testifying before the PCoI on Easter Sunday terror attacks for the 5th day, the former National Intelligence Chief was questioned on the letter of forewarning which was sent by the Director of State Intelligence Service Nilantha Jayawardena.

In response, Mendis told the Commission that he had received the letter marked “Top Secret” in the morning on the 8th of April 2019 and that it noted a possible imminent attack by National Thowheed Jama’ath led by Zahran Hashim.

When the Additional Solicitor General asked the witness to divulge his religious faith, Mendis said he is a devout Buddhist and that his wife is a Roman Catholic.

Mendis was then questioned on the steps taken upon learning from the letter on the 8th of April that important churches could be targeted.

He replied: “As soon as I received the letter in the morning on April 08, I tried to meet then-Defence Secretary Hemasiri Fernando, but it was futile. However, I was able to mee with him in the evening. During that meeting, I informed him of the foreign intelligence which raised a possible attack on churches.”

The Additional Solicitor General then asked if the former SIS chief Nilantha Jayawardena had expected some instructions from the chief of the National Intelligence by forwarding the initial piece of intelligence.

The witness responded that although he was the national intelligence chief, the SIS chief was not under him. “He was under the Defence Secretary. Hence, I don’t know what instructions should be given to him. Besides he is the most senior officer in charge of the country’s main organization, which provides intelligence. He has never sought instructions from me.”

The witness was asked if he did not get the impression that Catholic churches frequented the most by people could be targeted since the initial foreign intelligence noted the possibility of an attack on important churches.

The response of Jayawardena was that he did have such an impression and thus informed the police department of intelligence information.

The chairman of the Commission then asked the witness as to why the term “important churches” contained in the initial piece of information was revised to popular churches.

To this, the witness replied that although such a change was made during his translation, copies of the initial piece of intelligence were attached to the documents which were forwarded to the chief of the National Intelligence and the IGP.

He added, “I also informed that ringleader Zahran Hashim is linked to the Kattankudy blast prior to the Easter Sunday terror attacks.”

“Yet no one made such an inquiry prior to the attacks,” he added.