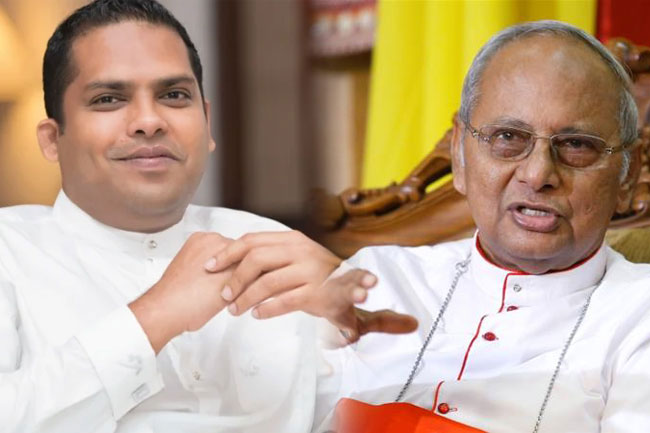 The Archdiocese of Colombo, issuing a press release, states that they rejects and condemns the statement made by MP Harin Fernando at the Presidential Commission of Inquiring probing the 2019 Easter Attacks, regarding the Archbishop of Colombo Cardinal Malcolm Ranjith.

Signed by Rev. Dr. Maxwell G. Silva, Rev. Dr. P. Anton Rajith, and Rev. Dr. J. D. Anthony, the press release states that MP Fernando attempted to insinuate that the Cardinal was aware of the impending attacks and thereby did not celebrate a public Mass on the day of the attacks.

However, this is purely a presumption on the part of the parliamentarian, the Archdiocese said.

The Archdiocese points out that Cardinal Malcolm Ranjith presided over Easter Vigil Service at midnight of Saturday, the 20th April 2019, as done in previous years, at the St. Lucia’s Cathedral, Colombo 13, followed by another Holy Mass at Archbishop’s House in the morning of the 21st.

The press release also notes that once the Cardinal received the news of the attack on St Anthony’s Church and he had rushed to Kotahena to ascertain the situation and to console those who had been affected.

Further, Archdiocese stated that they categorically affirm that the Cardinal and the Bishops as well as the Catholic clergy were in no way made aware of this plot by anyone and therefore the allegation made by MP Harin Fernando is baseless.

Full statement issued by the Archdiocese of Colombo is as follows:

“We wish to communicate that His Eminence Malcolm Cardinal Ranjith, the Archbishop of Colombo, the Administration and the entire Catholic Clergy of the Archdiocesan Presbyterium, is shocked by the news item which was carried in the print and the electronic media recently, with regard to the statement made by Mr. Harin Fernando, a member of the Samagi Jana Balawegaya (SJB), at the Presidential Commission of Inquiry investigating the attacks carried out on Easter Sunday 2019.

Giving evidence, Mr Fernando apparently has attempted to insinuate that the Cardinal was also aware of the impending attacks and did not celebrate a public Mass in the morning of that fateful day, is purely a presumption on the part of Mr Fernando. As done in the past years, His Eminence had indeed presided over the solemn celebration of the Easter Vigil Service at midnight of Saturday, the 20th April 2019 which followed with the Easter Sunday Festive High Mass at St. Lucia’s Cathedral, Colombo 13 ending in the early hours of Sunday Morning. Subsequently, he had celebrated another Holy Mass at Archbishop’s House in the morning of the 21st.

It is after this second Mass, that he received information of the bomb attack at St Anthony’s Church and he rushed to Kotahena to ascertain the situation and try to console those who had been affected. Mr. Fernando, therefore, has tried to defend himself by dragging the Cardinal into a fictitious creation of his mind. Once again we affirm categorically that the Cardinal and the Bishops as well as the Catholic clergy were in no way made aware of this plot by anyone and so the allegation is baseless.

We wish to therefore condemn this puerile attempt of Mr. Fernando to find excuses for his own grave misdeed and cast unjustified and unfounded aspersions on His Eminence. We reiterate that we fully trust the Presidential Commission of Inquiry to render justice to the hundreds of innocent people who lost their lives or were maimed for life due to, both the hateful actions of the terrorists and the shameful inaction of the political and administrative as well as intelligence officials of that time, who are responsible for this mindless carnage of human beings. Justice must prevail at all cost.”