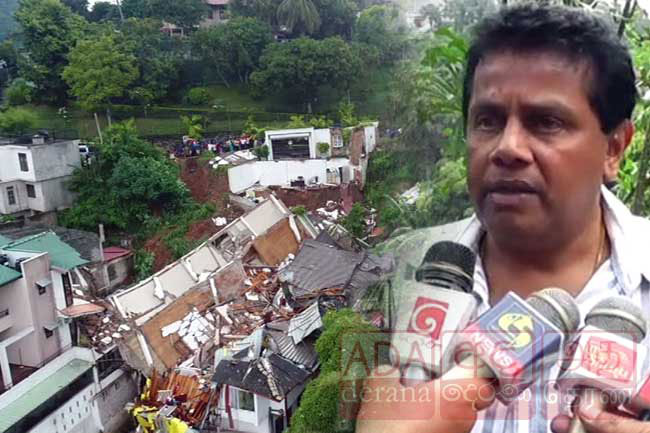 Owner of collapsed building in Kandy speaks on incident

A five-story building on the Sanghamitta Mawatha in Buwelikada, Kandy collapsed onto a nearby house last morning (20) and a family of three – father, mother, and one and half month old daughter – was killed in the incident.

Their bodies are to be handed over to the relatives today (21), following the post mortem at the Kandy Hospital.

Broad investigations are currently underway on the incident and Kandy Police recorded a statement from former Basnayake Nilame of Dodanwala Natha Dewalaya Anura Lewke, who is the owner of the building. Further interrogations will be carried out today, according to the Police.

Speaking the media today, Anura Lewke said that he had built this house to a proper standard through a private building construction company and that the construction work had been done with proper legal authorization from the State Engineering Corporation.

According to him, the house collapsed within seven minutes of them being alerted of the case.

The wife of the owner added that they built the house in 2006 and they had obtained every necessary authorization needed to be taken at that time.

Senior Professor Athula Senaratne of the Department of Geology at the University of Peradeniya inspected the scene today (21) and said that the accident may have been caused by the house not being built to the proper standards.

Officials from the National Building Research Organization (NBRO) commenced investigations into the building collapse yesterday and the probes are currently underway.