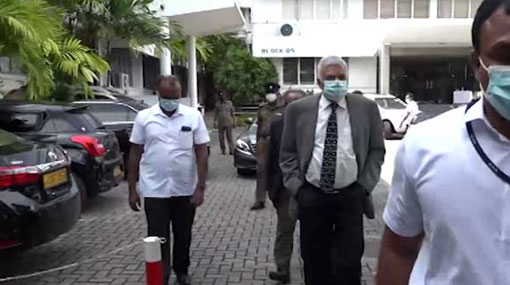 Former Prime Minister Ranil Wickremesinghe gave a nonchalant response when it was put to him that the Inspector General of Police (IGP) did not have the powers to establish the Financial Crimes Investigation Division (FCID) under the Yahapalana governance.

He thus considered that the FCID was in fact illegal when he appeared before the Presidential Commission of Inquiry probing alleged incidents of political victimization.

He appeared at the FCID with regard to a complaint filed by former Additional Director-General of the Department of Divi Naguma and present Director General of Samurdhi Bandula Tilaksiri.

During the proceedings, the Cabinet paper pertaining to the ‘Anti Corruption Committee Secretariat’ was brought to the attention of the former PM by the legal counsel representing the complainant.

In response, the former Premier said that the relevant power lies with the IGP.

Afterwards the legal counsel of the complainant quoted Section 55 of the Police Ordinance and emphasized that the IGP does not have power to establish a separate unit.

The Chairman of the Commission then made evident that the IGP had established a unit under a power which he doesn’t have.

The legal counsel of the complainant then made evident that though the gazette says that the FCID was established under Section 55 of the Police Ordinance, that particular section of the Ordinance does not accord such a power.

The response of the witness was, ‘If there isn’t power, there isn’t.’