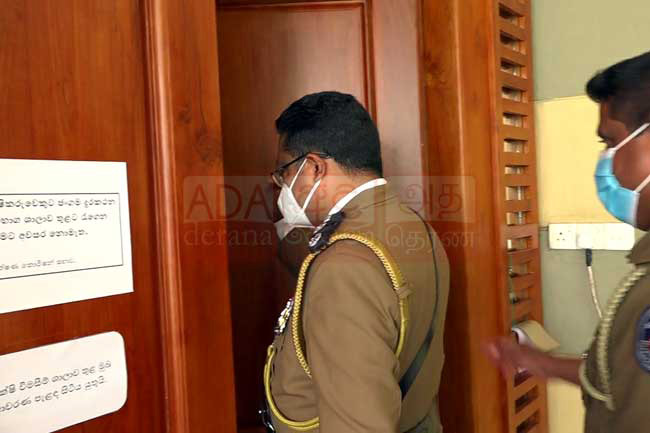 Nearly 15,000 must have known of foreign intel on Easter attacks  Ex-SIS Chief

Former Director of the State Intelligence Service (SIS) Nilantha Jayawardena believes that the forewarning given to him by a foreign intelligence agency ahead of the Easter Sunday attacks might not have been so secretive a mere week later.

Testifying before the Presidential Commission of Inquiry probing the 2019 Easter Sunday terror attacks, Jaywardena was insistent that around 15,000 people should have been aware of the intelligence if the former IGP had shared the intelligence as he claims he did.

He said that the reach of it was so vast, even Zahran Hashim himself, may have been aware of the foreign intelligence warning.

During the proceedings, President’s Counsel Shamil Perera, representing Archbishop Cardinal Malcolm Ranjith, asked the witness whether he would accept it, if another witness had testified before the Commission saying that the former SIS Director did not inform the National Security Council that Zahran Hashim is a terrorist.

The witness replied that he did not use the word ‘terrorist’, but did informed the Security Council that Zahran has IS ideologies and that he is motivating followers.

The President’s Counsel (PC) then asked the witness whether former President Maithripala Sirisena ordered the arrest of Zahran, during the National Security Council meeting in January, 2019.

In response Jayawardena said that an order wasn’t issued by the former President to arrest Zahran, but he did ask as to why he hadn’t been arrested yet when Zahran was mentioned.

The witness added that in any case, by then Pujith Jayasundara was not in the Security Council and that Hemasiri Fernando and Ravi Seneviratne were the ones there.

The PC asked the former SIS Director whether the Security Council was aware that Zahran Hashim had conducted 07 training camps at various locations in the country, and operated 02 centers where he conducted workshops.

Jayawardena replied that, as the SIS, they knew about the Blackpool training camp in Nuwara Eliya and the SIS did not have information on other training camps. As such, he added, that officers were not deployed for surveillance duties.

The PC then asked Jayawardena as to why the forewarning given by a foreign intelligence agency on April 04 was not mentioned in the intelligence documents forwarded to the the-IGP on April 18 and 19.

The witness replied, “I will respond with an example. We receive information that ‘Simion’ is set to commit a crime on a particular date at a particular time. We also come to know that ‘Simion’ has also bought a gun for this purpose. When acting on the matter, the attention is not initially given to find where he got the gun from or where the crime will be committed. Instead we target ‘Simion’ who is the criminal.

Like that, Zahran’s name is mentioned in the April 04th piece of information, I have included that name in the intelligence documents of April 18 and 19.

We had been saying since 2017 to render Zahran inactive. Besides, by April 11, around 10,000 persons may have been aware of the April 04 forewarning on Easter attacks.”

That remark prompted the Chariman of the Commission to ask Jayawardena, “You made a serious statement. Did you make it with responsibility, since you said by April 11, around 10,000 persons were aware of April 04 forewarning?”

To that Jaywardena responded, “I made the statement with responsibility. Former IGP Pujith Jayasunadara told the Commission recently, that when i sent the April 04 forewarning to him on April 09, he sent it to the Police STF. As far as I know there are about 5,000 STF personnel across the country.

But all 225 parliamentarians say that they were unaware of it. If such a piece of information comes to one of my personal security officers, I’m not spared from it.

Then the Embassy asks from on the morning of April 20, whether it is the same piece of information sent before. That means even the Embassy had been aware of this.

When that is the case even Zahran might be aware of it, despite it being intelligence sent by a foreign agency in confidence.

When adding all of these together, around 15,000 persons, let alone 10,000 should have been aware of this intelligence.”

Former SIS Director Nilantha Jayawardena further said, “Now everyone is trying to pin the blame on me saying that I did not take the April 04 foreign intelligence information for discussion at the intelligence coordination meeting held on April 09. I made the national Intelligence Chief aware of this piece of information on April 07.

When one of the documents he sent to me mentioned that Rishad Bathiudeen’s brother had helped Zahran to flee to India, I told him that this will become a political issue. A year later, that too has become a reality.

I came to know while listening to testimonies at the Commission that then-Defense Secretary Hemasiri Fernando had told National Intelligence Chief Sisira Mendis to ask me to take this information for discussion during the April 09 meeting. Had I been told that it would not have been difficult for me to take it up for discussion. But the National Intelligence Chief did not inform me of such.

I don’t have powers to read minds. As such, if I‘m to take the responsibility over failing to prevent the attack, I will only bear it until April 07 when the piece of information was with me.”

Then the PC asked the witness whether he is attempting to wash his hands off by saying that information was sent to responsible sections.

But, this Commission and the subsequent legal process will determine whether I’m wrong, who’s wrong, whether I should be punished or go to prison.”