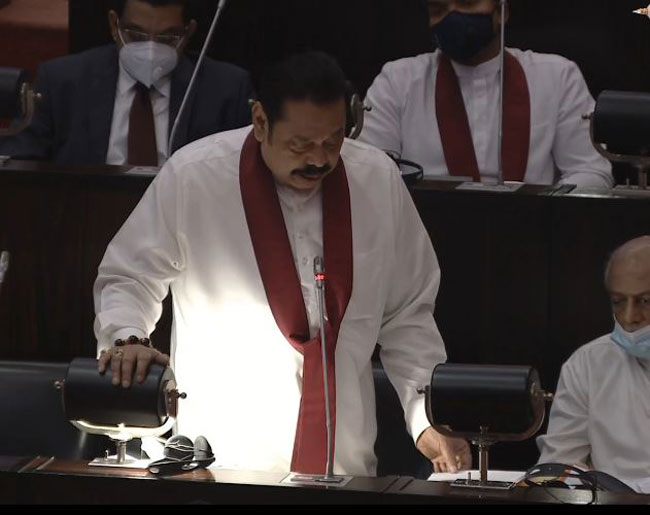 19A was brought to take revenge from one family  PM

The 20th Amendment to the Constitution is brought to remove the 19th Amendment which turned the country into anarchy, said Prime Minister Mahinda Rajapaksa at the parliament today (21).

The proposed 20th Amendment was taken into the debate at the Parliament this morning.

The recent parliamentary election and the presidential poll showed that the public’s desire to remove the 19A, stated the Prime Minister.

He points out that the people trust the President of the country on the matter of national security.

The unitary status and the solidarity of the country are represented by the country’s President. Therefore, the mandate of the people placed in the President should be taken into consideration.

Rajapaksa, addressing the House, stated that they do not intend to bring in anything special through the 20A; only just to remove the 19A which turned the country into anarchy. According to him, the 19A restricted the powers of the President who is supposed to protect the unitary status of the country.

‘The results came in within three years’, he added.

He points out that the evidence being heard at the Presidential Commission of Inquiry probing the 2019 Easter Sunday attacks shows how the country was anarchized because of the 19A.

Even those who created the 19A admit that ‘it was a bomb, a mistake’, he said.

“The 19th Amendment was brought to take revenge from one family. To revoke the civil rights of Rajapaksas without revoking them.”

Speaking further, PM Rajapaksa states that there is a question as to whom the National Police Commission, established through 19A, is answerable to, as even the IGP cannot transfer ineffective officers while appointments are made without the knowledge of the IGP.

He asked whether 6.9 million people voted for a Presidency that cannot even fire an IGP.

“If I wasn’t an executive president back then, I would have had to halt the war when MP crossed over to the other side in 2006.”

The Independent Audit Services Commission, also established through the 19A, has even audited ministries let alone the President’s House and the Temple Trees, Rajapaksa says.

The PM added that the 19A was approved through political deals with no opportunity to debate or to oppose the amendment.

The purpose of the proposed 20A is not to continue with the existing Constitution, but to carry on until a new, nation-building Constitution is formed as per the long term hope of the people, Prime Minister Rajapaksa said.