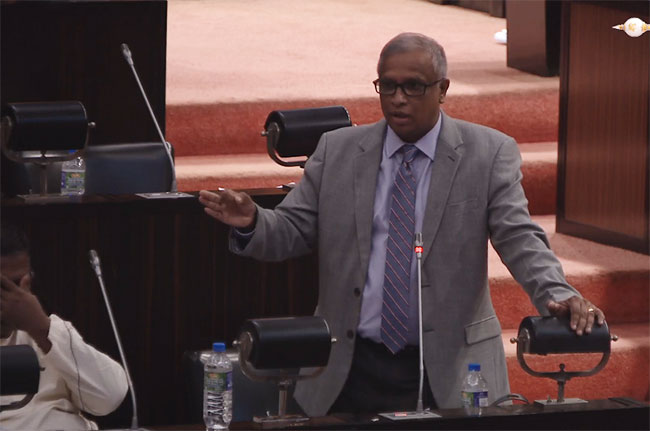 TNA parliamentarian M.A. Sumanthiran says that the people of the country did not give President Gotabaya Rajapaksa the mandate to strengthen the Executive Presidency or even to retain it, at the last presidential election.

“The others cut very sorry figures here today, having raised their hands to propositions that are diametrically opposite. In opposite directions.”

“That’s the vicissitudes of politics, they might say but it’s not honorable conduct,” he added.

When the 17th Amendment and the 19th Amendment was passed, why was it that almost the whole House approved it, he questioned. “Why did it happen? It didn’t happen for any other amendment, but those two.”

Because those had the total approval of our people that this country must remain a democratic country, he said. “That messy as it is, democracy is the way that we have chosen and that’s the way, that’s the path we will tread.”

“Democracy is messy. We know that. All of us know that. Discussion deliberation takes time and sometimes it is costly even. But that is democracy. That is people’s rule. That’s how you ensure that it is the people’s will that eventually materializes.”

Sumanthiran said that the Minister of Justice had yesterday quoted him saying that he had conceded that there were problems with the 19th Amendment.

“Yes I agree that I have said that and I am able to say it even today. There were snags.”

However, those were brought about more because of the last minute Committee Stage amendments that were “forced” in this House and due to certain changes that the Supreme Court required, he said.

Sumanthiran said that the 19th Amendment was to be the first step in the process of abolition of Executive Presidency. “It was in that direction and this House had every right, indeed the duty, to proceed in that direction.”

He stated that from the mid-1990s there has been a consensus in this country that the Executive Presidency must be abolished.

“In the last presidential election this country did not give President Gotabaya Rajapaksa the mandate to strengthen the Executive Presidency or even to retain it. It was never articulated in that way,” he said.

He said that is why TNA leader R. Smapnathan said yesterday that they have made their decision. “We have always made our decision on principle and in principle we are opposed to this.”