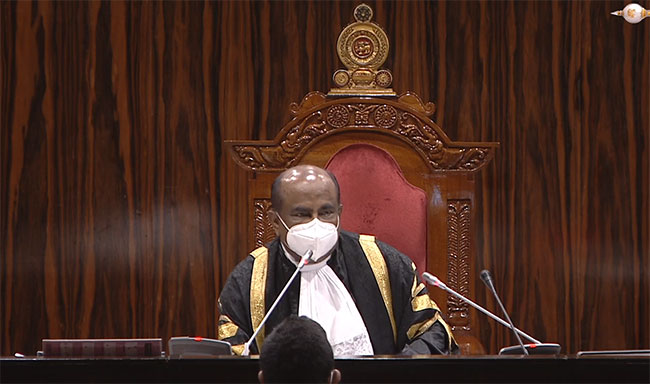 20th Amendment to the Constitution passed with amendments

The Third Reading of the 20th Amendment to the Constitution has been passed with amendment with a two-thirds majority.

A total of 156 voted in favour of the constitutional amendment while 65 MPs voted against.

The Second Reading of the 20th Amendment was also passed in Parliament with a two-thirds majority, this evening.

A total of 213 Member of Parliament were present during the Second Reading with 156 voting in favour of the constitutional amendment and 65 voting against it.

Former President and current SLPP parliamentarian Maithripala Sirisena was absent during the vote.

The Second Reading vote was followed by the Committee Stage Discussions with the final vote taking place afterwards.

Opening the two-day debate yesterday, Minister of Justice Ali Sabry stated that the government has made amendments to the draft constitutional amendment considering the concerns raised by the public, despite having being given the go-ahead from the Supreme Court

He noted that it will be amended to limit the Cabinet of Ministers to 30 portfolios with another 40 non-Cabinet portfolios, and the Emergency Bills will be limited to cases of national disaster or events affecting national security, among other amendments.

He further said that the two articles determined inconsistent with the Constitution will also be amended as per the order of the Supreme Court.

However, more amendments to the current draft bill will be added during the Second Reading of the Bill, Sabry said.

The government has also decided to add several amendments to the draft constitutional amendment during the committee stage in Parliament.

The Committee Stage of the proposed amendment commenced post the two-day debate which commenced last morning (21). The debate lasted until 7.30 pm for the second consecutive day today.

Following the Committee Stage, the legislators voted on the draft bill of the proposed 20th Amendment to the Constitution.