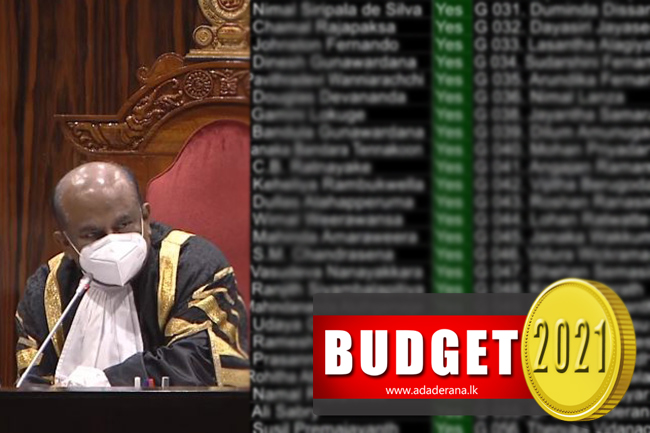 The Second Reading of the Appropriation Bill for the fiscal year 2021 has been approved in the Parliament with a majority of 99 votes.

The House passed the Second Reading with 151 votes in favour and 52 against.

Notably, MPs Diana Gamage, A.A.S.M. Raheem and Ishak Rahuman, who raised eyebrows last month after backing the government in the vote on 20th Amendment to the Constitution while representing the main Opposition, have voted in favour of Budget 2021 as well.

The debate on Second Reading, which commenced on Wednesday (18), continued for the fourth consecutive day today and the vote commenced at around 5.35 pm.

The debate of the Committee Stage or the Third Reading of the budget proposal is set to commence on Monday (23). It will conclude on the 10th of December and accordingly, the final vote will take place at 5.00 pm on that day.

Prime Minister Mahinda Rajapaksa, in his capacity as the Minister of Finance, presented the second reading of Budget 2021 in Parliament on Tuesday (17).

Government plans to maintain the budget gap at 9 percent of the GDP and the expected economic growth rate for 2021 is 5.5 percent, the Premier said during the budget speech.