The Department of Meteorology has issued a ‘Red’ alert warning against heavy rain, strong winds, and rough seas.

The warning has been issued at 3.30 pm today (November 22) by the Natural Hazards Early Warning Centre of the Meteorology Department. 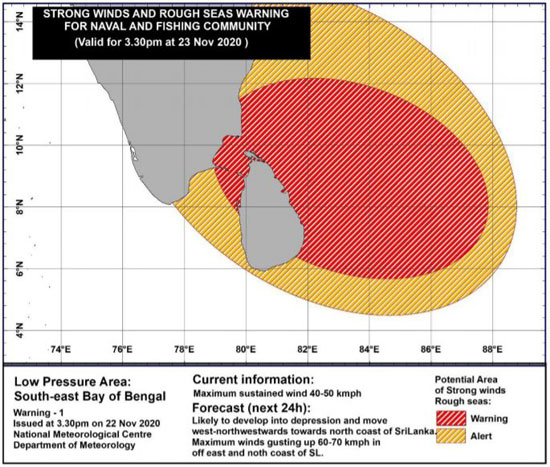 Under the influence of the aforementioned system, the possibility for intermittent showers or thundershowers and sudden roughness, associated with a sudden increase of wind speed up to 70-80 kmph is high over Eastern and Northern, deep and shallow sea areas during the next 24 hours.

Wind speed can increase up to 50-60 kmph at times over sea area extending from Puttalam to Matara via Colombo.

There is a possibility that nearshore sea areas off the coast extending from Mannar to Pottuvil via Kankesanturai, Trincomalee, and Batticaloa may experience surges due to the effect of swell waves, having (2.0-3.0) m height during the next few days. 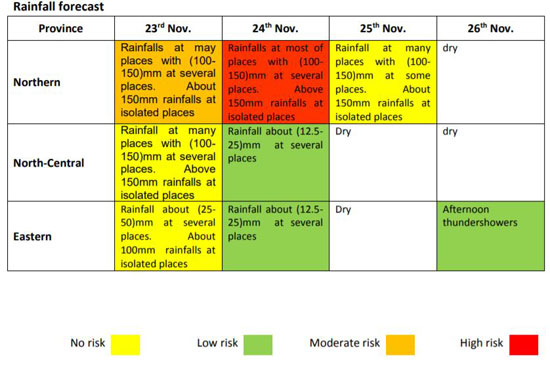 - Navel and fishing communities are warned not to venture to the sea areas extending from Puttalam to Pottuvill via Mannar, Kankasanthurai, Trincomalee, and Batticaloa.
- Those who are out in the aforementioned sea regions are advised to return to coasts or moved safer areas immediately.
- Naval and fishing communities are requested to be vigilant during the activities in the sea areas extending from Puttalam to Matara via Colombo and further requested to be attentive about future advisories issued by the Department of Meteorology in this regard.

- People living in Eastern, Northern, and North-Central provinces are requested to be vigilant.
- Be on alert for the advisories issued by the Department of Meteorology.
- For emergency assistance contact the local disaster management authorities.