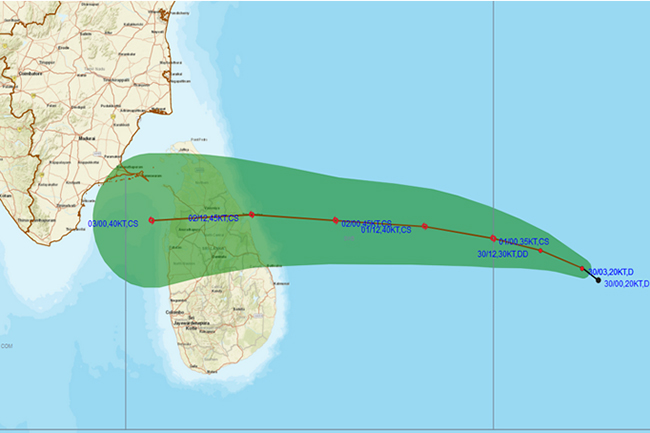 The Department of Meteorology says the Depression over the south-east Bay of Bengal, which laid centred 590 km east and southeast to Trincomalee at 11.30 pm yesterday (30), is very likely to intensify into a deep depression during next six hours and likely to intensify further into a cyclonic storm during the subsequent 12 hours.

This system is very likely to move west and north-westward and cross eastern coast of Sri Lanka between Batticaloa and Mullaitivu around tomorrow evening (02).

Showers or thundershowers at times will occur in the Eastern, Northern, Northern-central, and Uva provinces and in Hambantota and Matale districts. Heavy rainfall above 100mm can be expected at some places.

Showers may occur at several places in North-western province and showers or thundershowers will occur at a few places elsewhere after 2.00 p.m. Cloudy skies can be expected over the island.

The public has been requested to take adequate precautions to minimize damages caused by temporary localized strong winds and lightning during thundershowers.

Due to the aforementioned system, intermittent showers or thundershowers, strong or very strong gusty winds and rough or very rough seas can be expected in the sea areas in between 05N-12N, 82E-92E during next few days.

Naval and fishing communities have been urged not to venture into the deep sea areas to the East coast of the Island (5N-12N, 82E-92E) until further notice.

Fishing and naval community are requested to be vigilant and attentive about future bulletins issued by the Department of Meteorology in the next few days.

Showers or thundershowers will occur at times in the deep sea areas extending from Kankesanturai to Pottuvil via Trincomalee and Batticaloa.

Winds will be north-easterly in the sea areas around the island and the wind speed will be (30-40) kmph.

There is a possibility that near shore sea areas off the coast extending from Kankesanturai to Pottuvil via Trincomalee and Batticaloa may experience surges due to the effect of swell waves, having (2.0-3.0) m height.