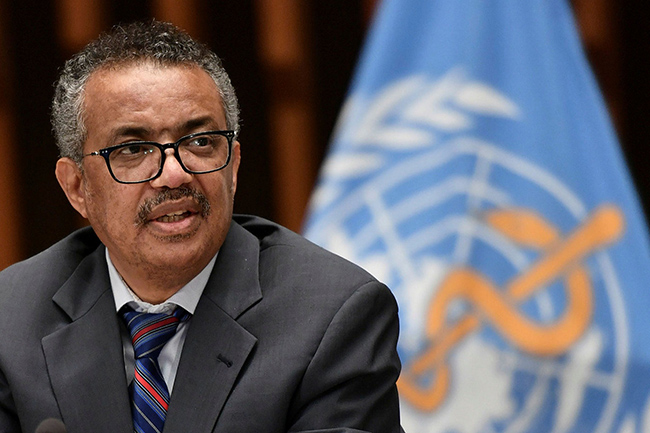 WHO concerned at growing perception COVID pandemic is over

The head of the World Health Organization (WHO) sounded the alarm on Friday over the “growing perception” that the COVID-19 pandemic is over, despite exploding infection rates in some countries and enormous pressure growing on health services.

WHO Director-General Tedros Adhanom Ghebreyesus told journalists at the regular Geneva briefing that progress on vaccines, in recent days, “gives us all a lift, and we can now start to see the light at the end of the tunnel.”

He praised the United Kingdom’s emergency authorization for the Pfizer/BioNTech rollout which is due to begin next week, describing it as “an important scientific step for the world”.

“However, WHO is concerned that there is a growing perception that the pandemic is over”, he said, noting from the European experience of successful lockdowns followed by relaxation, that “as these measures are lifted, it’s important that people should continue to follow national and local measures to ensure that cases do not rebound.

“Even as vaccines are rolled out, people will need to keep adhering to public health measures so that everyone is protected”, said Tedros.

“We know it’s been a hard year and people are tired, but in hospitals that are running at, or over, capacity; it’s the hardest it can possibly be”, said the WHO chief, making a personal appeal for everyone everywhere, to be careful, think of health workers, and “act for the greater good”.

“The pandemic still has a long way to run and decisions made by leaders and citizens in the coming days will determine both the course of the virus in the short term, and when this pandemic will ultimately end”, he added.

With the first inoculations due to be given in just a few days’ time, he stressed the importance of equitable distribution.

In the first phase of the rollout, sufficient doses will be provided to cover health and social care workers, said Tedros.

“As supply increases, vaccines will be rolled out to cover 20 per cent of the population of participating countries and economies, which will ensure further high-risk groups are covered. The payoff from this will be huge.”

New research by the Eurasia Group, has found that the economic benefits of a global equitable vaccine solution alone for just 10 high-income countries, would be at least US $153 billion in 2020-21, rising to US $466 billion by 2025, Tedros told reporters.

“Equitable distribution is the right choice and the smart choice”, the WHO chief concluded.