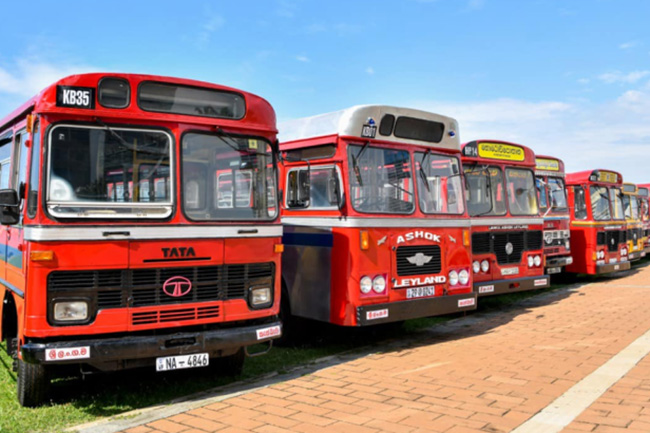 A total of 273 buses belong to Sri Lanka Transport Board (SLTB) which were taken out of service due to dilapidation were repaired and re-added to the passenger transportation under the patronage of President Gotabaya Rajapaksa at the Galle Face Green today (31).

These buses will be utilized to meet the passenger transportation needs in rural areas throughout the country, the President’s Media Division (PMD) said in a press release.

The project, based on a concept of the State Minister of Vehicle Regulation, Bus Transport Services and Train Compartments and Motor Car Industry Dilum Amunugama, was implemented under the guidance of Transport Minister Gamini Lokuge.

In order to rebuild the collapsed economy vehicle imports were restricted after the new government came into power and as a result, there occurred a shortage of buses for passenger transport, the PMD said further.

Launched as a solution to this issue, the new project is expected to save foreign exchange spent on importing buses.

In all, 273 buses that were completely out of service at 107 depots island-wide have been repaired at a cost of Rs. 115 million.

The project is being carried out by SLTB depots and Lakdiva Engineering with the full support of the Sri Lanka Public Transport Employees Union.

After inspecting the standard of the buses, the President engaged in a cordial chat with the employees of SLTB.