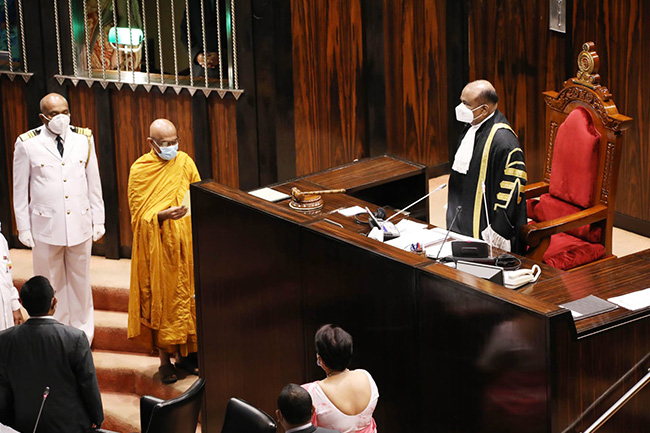 Athuraliye Rathana Thero sworn in as an MP

Venerable Athuraliye Rathana Thero has been sworn in as a Member of Parliament before Speaker Mahinda Yapa Abeywardena this morning (January 05).

The first sitting of the ninth Parliament for the year 2021 commenced at 10.00 am today.

Rathana Thero was appointed by the ‘Ape Jana Bala Pakshaya’, also known as Our Power of People Party (OPPP) on December 18 last year, to fill its National List parliamentary seat which was left vacant for several months.

The relevant gazette notification, issued by the Commissioner-General of Elections, was later published by the Department of Government Printing.

Accordingly, Rathana Thero, who was first elected to the Parliament in 2004 from Kalutara District as a representative of Jathika Hela Urumaya (JHU), is serving as a lawmaker for the fourth time, under Article 99A of the Constitution.

Contesting under United People’s Freedom Alliance (UPFA), he was elected to Parliament for the second time in 2010 from Gampaha District.

Rathana Thero represented the Parliament for the third time after he was appointed as a National List MP of the United National Party (UNP) in 2015.

‘Our Power of People Party’ had recently faced a crisis following a dispute within the party with regard to its National List seat in Parliament.

OPPP received a total of 67,758 votes (0.58%) at the General Election in August 2019 and despite failing to win any seats in the districts it contested, the party did manage to receive one National List seat.

A problematic situation had arisen with regard to the National List seat after the General Secretary of the party Ven. Wedinigama Wimalatissa Thero had submitted a letter to the Election Commission claiming that he has been nominated to enter parliament as the party’s National List MP.

However, a group including the Chairman of the OPPP later notified the commission that the said letter is not valid and that the central committee of the party decided to nominate party member Ven. Galagoda Aththe Gnanasara Thero for the National List MP seat.

Meanwhile the General Secretary of the party Ven. Wedinigama Wimalatissa Thero, who was responsible for officially informing the Election Commission of the nominee chosen for the MP seat, had then suddenly disappeared and was reportedly in hiding.

The party later decided to appoint a new General Secretary and informed the Election Commission of this decision while also asking the commission to reject the letter sent by Ven. Wimalatissa Thero nominating himself to the seat.

OPPP General Secretary Ven. Wedinigama Wimalatissa Thero, speaking to Ada Derana from an undisclosed location in August last year, had insisted that he will take his place in parliament until the tussle between Ven. Athuraliye Rathana Thera and Ven. Galagoda Aththe Gnanasara Thera is resolved and also claimed that he is in hiding due to threats to his life.