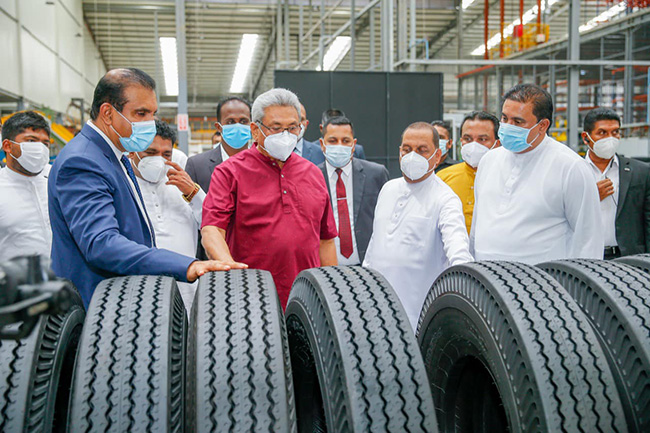 The factory has been set up on a 155-acre land which belongs to BOI Industrial Zone in Wagawatta, Horana. Investment of the first phase is USD 100 million. Manufacturing will be carried out using European technology and state-of-the-art equipment.

Promotion of the export market potential of this country, generating a large number of direct and indirect employment opportunities and the ability for local rubber producers to obtain a higher price are some of the benefits of the factory.

The management of the factory has taken measures to recruit qualified women to fill the vacancies for technical positions beating adopted standards in the industrial sector. The factory is an ecofriendly entity.

Upon arrival at the event, President Rajapaksa was welcomed by the Chairman of Ferentino Tyre Corporation PVT Ltd Nandana Lokuwithana.

After unveiling the plaque the President inspected the entire manufacturing process at the factory.

The President also presented a memento to Dewmi Yasasmi of Sumanajothi Vidyalaya in Ingiriya who obtained 200 marks in the Grade 5 Scholarship Examination held recently.