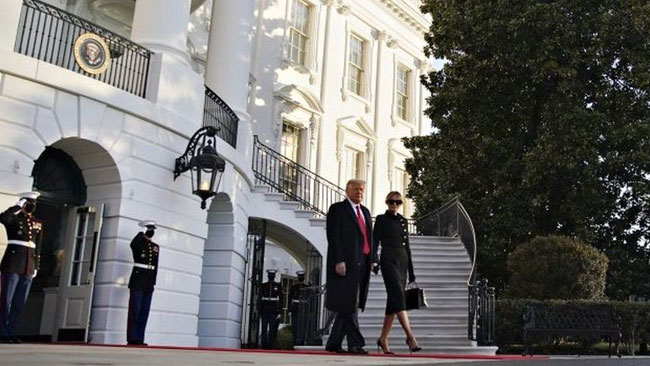 Donald Trump has left the White House for the final time of his presidency, ahead of the inauguration of Joe Biden.

Mr Trump has taken a helicopter to the nearby Andrews base, where he is now speaking, and will then board the Air Force One plane for Florida.

He is the first president to snub his successor’s inauguration since 1869.

Mr Biden will take the oath of office by noon (17:00 GMT) in Washington, which has been fortified following a deadly riot at the Capitol this month.

Some 25,000 troops will guard the inauguration ceremony, which will be missing the traditional hundreds of thousands of spectators due to the coronavirus pandemic.

Alongside Mr Biden, Kamala Harris will make history when she is sworn in as the nation’s first woman vice-president.

Ahead of his inauguration Mr Biden on Wednesday set out 15 executive actions he would take immediately, covering climate, equality, immigration and coronavirus.

How will inauguration day unfold?
Mr Biden will be sworn in as 46th president of the United States by Supreme Court Chief Justice John Roberts outside the US Capitol.

There is extra-tight security after the Capitol was breached by violent pro-Trump protesters on 6 January.

Among those present will be three former presidents: Barack Obama - whom Mr Biden served for eight years as vice-president - Bill Clinton and George W Bush.

Aides say Mr Biden, a Democrat, will use his inaugural address of about half an hour to deliver an optimistic call for national unity after his Republican predecessor’s turbulent tenure.

Minutes beforehand, Vice-President-elect Harris will be sworn in, becoming the first woman and the first black and Asian-American elevated to serve in a role a heartbeat from the presidency.

There will be musical performances from Lady Gaga - who will sing the national anthem - as well as Jennifer Lopez and Garth Brooks.

An evening concert at the Lincoln Memorial in the city will be hosted by Tom Hanks and include Bruce Springsteen, John Legend, Jon Bon Jovi, Justin Timberlake, and Demi Lovato.

Mr Biden, a Catholic, plans to attend Mass on Wednesday morning at a cathedral in the city with the four top congressional leaders - both Republicans and Democrats.

What is Trump doing?
He and First Lady Melania Trump walked out on to the White House’s South Lawn at about 08:10 local time and headed to the Marine One helicopter, which has now completed the short trip to Joint Base Andrews in Maryland, where Mr Trump is delivering his final speech as president.

He earlier stopped to talk to briefly to reporters at the White House, saying: “It’s been a great honour to be president,” CNN reported.

Mr Trump will be the first president not to attend his successor’s inauguration since Andrew Johnson snubbed Ulysses S Grant in 1869.

After the farewell ceremony at Andrews with a gun-salute and military band, he will fly off to begin post-presidential life at his Mar-a-Lago golf club in Palm Beach.

In his last hours, Mr Trump granted clemency to more than 140 people, including his former adviser Steve Bannon, who is facing fraud charges.

In a farewell video message on Tuesday, Mr Trump called on Americans to pray for the incoming administration, though he did not mention his successor by name.

He said he was proud of what he had achieved over the past four years, highlighting his Middle East peace deals and his record as the first president in decades not to start any wars.

But the political drama surrounding him is far from over. The US Senate is expected to put him on trial soon, following his record second impeachment by the House of Representatives for allegedly inciting the Capitol riot.

On Tuesday, the Senate’s Republican leader, Mitch McConnell, said the mob had been provoked by Mr Trump and fed lies.