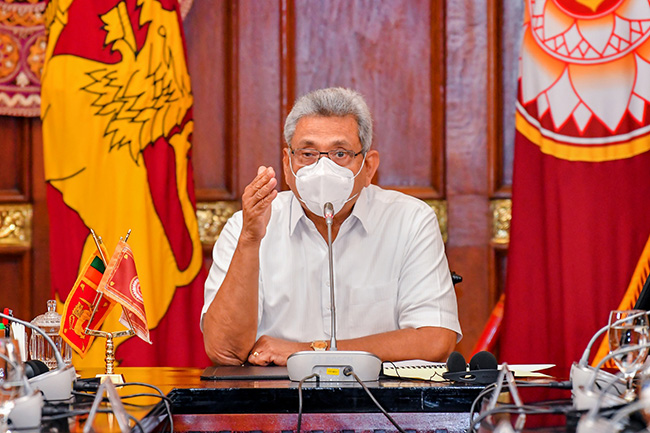 President Gotabaya Rajapaksa says the first batch of Oxford-AstraZeneca Covid-19 vaccines manufactured in India is expected to arrive in Sri Lanka on the 27th of January.

Accordingly, Sri Lanka will be receiving the 500,000 vials of doses with the first vaccine consignment.

He noted that Covid-19 jabs will be first administered to medical officers, Public Health Inspectors (PHIs) and other health sector workers who are on the front line of coronavirus outbreak in the country.

Officers of tri-forces who work closely with medical staff and people who are more vulnerable to virus infection will be given the jabs subsequently, the President added.

Indian High Commission in Colombo later said the Sri Lankan government has conveyed that approval was granted for the emergency use of COVISHIELD vaccines.

COVISHIELD is the local name for the Oxford-AstraZeneca vaccine developed in the United Kingdom.

The vaccine, which is known as COVISHIELD, is developed from a weakened version of a common cold virus (known as an adenovirus) from chimpanzees.

It is administered in two shots – the second dose must be taken four to six weeks following the first.

Unlike the Pfizer-BioNTech jabs, which require 70C temperature for storage, COVISHIELD can be safely stored at temperatures of 2C to 8C, which is about the same as a domestic refrigerator.

The vaccines supplied to neighbouring countries are sent as grants and India’s External Affairs Ministry said the vaccines were not part of COVAX – the United Nations-backed global effort aimed at lower-income nations to obtain the jabs.