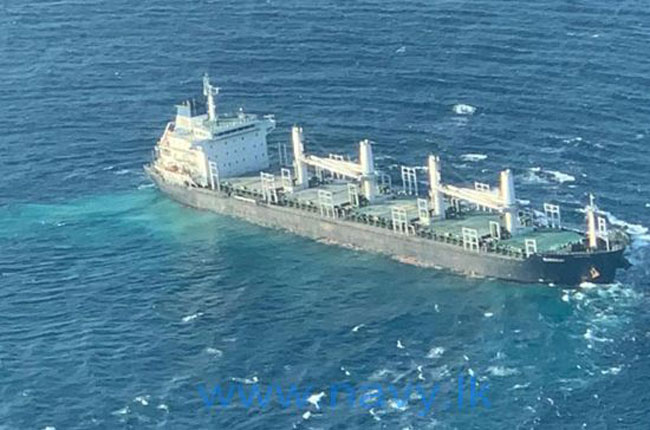 Divers of the Sri Lanka Navy are currently monitoring the condition of the cargo ship that had run aground near the Little Basses Reef on the south-east coast of Sri Lanka.

The monitoring process commenced this morning (January 24) and the investigations have revealed that the hull of the ship was damaged, stated Sri Lanka Navy.

However, the front and rear of the ship have not been damaged in the accident, says Captain Indika de Silva, the Navy Media Spokesperson.

In addition, there is no risk of a fuel leak, the spokesman added.

‘MV Eurosun’, a bulk carrier named en route to Trincomalee from the United Arab Emirates (UAE) carrying cement, ran aground at Little Basses Reef which is about 5.5 nautical miles (10km) off the southeastern coast of the island, yesterday (January 23).

Upon receipt of a distressed call to the Maritime Rescue Coordination Centre (MRCC Colombo), the Sri Lanka Navy immediately dispatched a ship and a craft from the ports of Hambantota and Galle to assist the bulk carrier sailing under the Liberian flag.