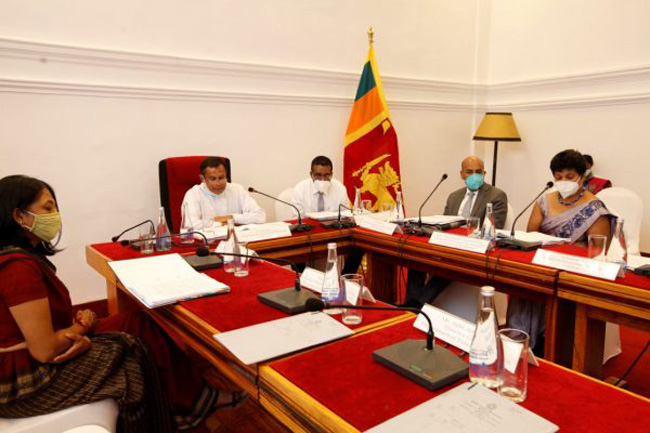 The European Union (EU) and the Democratic Socialist Republic of Sri Lanka held their 23rd meeting of the Joint Commission on Monday via video conference, says the Ministry of Foreign Affairs.

This was the first Joint Commission under the new leadership in both the European Union and Sri Lanka.

The Joint Commission meeting was held in a cordial and open atmosphere and the EU and Sri Lanka exchanged views on a wide array of subjects, reaffirming the deep cooperation ties and the willingness to strengthen the relationship between the people of the EU and Sri Lanka further. The EU and Sri Lanka agreed on the importance of enhancing trade ties and continuing to work closely together on human rights and reconciliation issues which were on the agenda of the meeting.

Sri Lanka has thanked the EU for its contribution of €22 million grant to support the government’s efforts to deal with the COVID-19 pandemic targeting the health, agriculture, and tourism sectors. The EU and Sri Lanka have highlighted the role played by the World Health Organisation (WHO) and noted the importance of an effective multilateral system in addressing the challenges related to the pandemic.

Sri Lanka and the EU concurred that the EU’s unilateral tariff preferences granted under the Special Incentive Arrangement for Sustainable Development and Good Governance (GSP+) have made a significant contribution to Sri Lanka’s economy. Exports from Sri Lanka to the EU have increased to reach €2.3 billion (Sri Lankan currency equivalent), thus making the EU Sri Lanka’s second-largest export market.

The Joint Commission acknowledged that there was potential for Sri Lanka to make even better use of the tariff concessions granted. In this regard, among other things, the EU also stressed that open and fair trade requires a level playing field, and expressed its strong concerns about Sri Lanka’s import restrictions imposed since April 2020, following COVID-19, which have a negative impact on European businesses.

The EU urged Sri Lanka to notify these measures to the World Trade Organisation. The EU and Sri Lanka committed to further enhance the regular EU-Sri Lanka Investor Dialogue to address impediments affecting trade and investment from the EU.

Sri Lanka reaffirmed the commitments made to effectively implement the 27 international Conventions covered by the GSP+ scheme on human and labour rights, environment and good governance.

In this context, the EU reiterated the need for Sri Lanka to amend the Prevention of Terrorism Act and bring it in line with international standards. The Sri Lankan government confirmed its intent on revisiting the provisions of the PTA with a view to making the appropriate amendments.

The EU stressed that it regrets Sri Lanka’s withdrawal from its co-sponsorship of the UN Human Rights Council Resolution 30/1and subsequent resolutions that incorporated and built on it. Sri Lanka explained how it would advance national reconciliation and action taken in accordance with its Constitution and laws. Sri Lanka recently announced the appointment of a Commission of Inquiry to investigate alleged human rights violations.

The EU reiterated the importance of fostering reconciliation, justice, accountability and peaceful coexistence among Sri Lanka’s diverse communities, and underlined the important role of the independent institutions established in recent years, notably the Office on Missing Persons, the Office for Reparations and the Human Rights Commission. The EU stressed the value of a fully empowered and resilient civil society, in all its diversity for any democracy. The EU expressed its continued readiness to support Sri Lanka in these efforts.

The Joint Commission was informed about the proceedings of the fourth EU-Sri Lanka Working Group on Development Cooperation held in Brussels on 28 October 2020.

In addition to the support for Sri Lanka’s COVID-19 response, the Working Group appraised positively another three grants from the European Union worth €35.75 million, which will support Sri Lanka’s justice sector, help improve food safety, and strengthen efforts to mitigate climate change.

Implementation is planned for 2021 and beyond. The EU and Sri Lanka committed to working together in the coming years on the preparation of possible new actions aiming at addressing green recovery, promotion of inclusive and peaceful society, and water management.

The European Union and Sri Lanka explored possibilities for future cooperation on climate change, in particular on the implementation of the Paris Agreement. It was agreed that recovery from the global COVID-19 crisis should be used as an opportunity to rebuild the economies in a sustainable manner.

The EU welcomed Sri Lanka’s commitment to the implementation of the environmental and climate change conventions, notably the revision of the Nationally Determined Contributions, which will be submitted timely to the UN Framework Convention on Climate Change (UNFCCC) in February 2021.

The EU also appreciated Sri Lanka’s positive approach towards a Global Agreement on Plastics and President Rajapaksa’s commitment to reversing biodiversity loss by 2030 [through the Leader’s Pledge for Nature at the UN Summit for Biodiversity].

The EU stressed its recent actions to enhance its climate ambition, including climate neutrality by 2050 and the increased 2030 targets of reducing its greenhouse gas emissions by at least 55% compared to 1990. Sri Lanka confirmed its commitment to taking ambitious action to ensure a sustainable, low-carbon and climate-resilient development.

The European Union and Sri Lanka took note of the ad-hoc Counter-Terrorism Dialogue, which took place in Colombo in July 2019 and reviewed on-going cooperation provided through an EU-funded project with UN Office on Drugs and Crime (UNODC) and Interpol.

The EU stressed the importance of applying international human rights standards in the fight against terrorism. Sri Lanka looks forward to continuing the Counter-Terrorism Dialogue and Security Cooperation.

Issues related to mobility and migration were also on the agenda. Ways to enhance cooperation on higher education, with a particular reference to the Horizon 2020, the EU framework programme for research and innovation, were also addressed.

Cooperation in the framework of the Indian Ocean Tuna Commission (IOTC) and towards the common goals of preservation of healthy oceans, conservation and sustainable use of marine living resources was discussed.

The EU and Sri Lanka agreed on a series of actions for follow-up before the next Joint Commission meeting in Brussels in 2021.

The meeting was co-chaired by Ms Paola Pampaloni, Deputy Managing Director for Asia and the Pacific at the European External Action Service, and Mr A.M.J Sadiq, Additional Secretary of the Foreign Ministry of Sri Lanka.

The Joint Commission, which oversees the 1995 EU-Sri Lanka Cooperation Agreement on Partnership and Development, deals with a broad range of bilateral and multilateral issues of mutual interest. Its tasks are to: ensure the proper functioning and implementation of the Agreement; set priorities; and make recommendations.

Sajith says he will provide leadership to rebuild the country

A week of holidays announced for schools

Sajith says he will provide leadership to rebuild the country

A week of holidays announced for schools