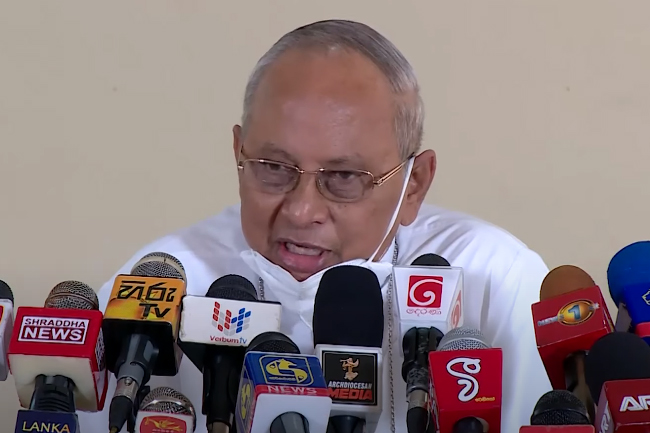 Archbishop of Colombo His Eminence Malcolm Cardinal Ranjith says he is ready to seek International Criminal Court (ICC) probe if law is not properly enforced against those who are responsible for the Easter Sunday terror attacks in 2019 which claimed the lives of more than 260 persons.

He made this remark in response to questions raised during a media briefing held at the Archbishop’s House in Colombo this morning (February 11).

The Cardinal went on to say, “I hope our leaders will not allow that to happen.”

Speaking further, the Cardinal said he has requested President Gotabaya Rajapaksa for access to the report of the Presidential Commission of Inquiry (PCoI) on Easter Sunday bombings. He, however, noted that he is yet to receive a copy of the report.

The PCoI to investigate the 2019 Easter Sunday terror attacks handed over its final report to the President on February 01.

Hearings and other procedures of the Presidential Commission officially concluded on January 27.

The Commission was appointed by former President Maithripala Sirisena on September 22nd, 2019 to investigate the coordinated series of attacks that took place on Easter Sunday same year and to recommend necessary actions.

The Cardinal says he has requested the panel of the PCoI to look into the individuals who were behind the terror attacks, in addition to probing those who failed to prevent carnage. “I hope the Commission would respond positively to the request,” he added.