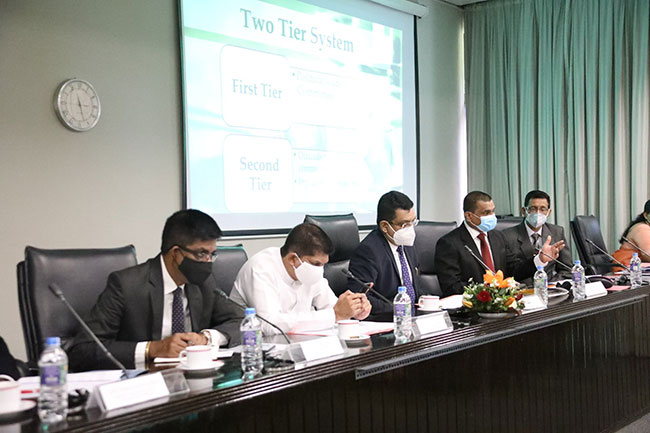 Minister of Justice Mohamed Ali Sabry stated that a massive transformation of the whole justice system is under way in which three full time sub-committees pertaining to Criminal Law reforms, Civil Law reforms and Commercial Law reforms are at work whilst another committee of experts is involved in drafting the new Constitution.

The Minister stated the above at the Ministerial Consultative Committee on Justice held yesterday (11) with special emphasis on the transformation of the Criminal Justice System.

The discussion on community-based correction was set in motion following the presentation by the Assistant Secretary General of Parliament and former Justice Official Mr. Tikiri K. Jayathilake. The Assistant Secretary General addressing the committee stated that Criminal Law and the notion of justice are entwined and it is important to extricate an individual into society as a responsible citizen rather than labeling them as criminals.

The Assistant Secretary General of Parliament Tikiri K. Jayathilake stated that the said objective could be done by the Consultative Committee via two tiers. One being the political tier inclusive of the political leadership in stirring towards the requisite reforms. The second tier includes officials and professionals representing various fields contributing their expertise towards the creation and development of relevant reforms.

Minister Ali Sabry stated that it is the intention of the Ministry to involve everyone who is willing to contribute for the decision-making process for betterment.  Furthermore, the Minister pointed out that before COVID-19 and under normal circumstances, there are approximately 30,000 to 33, 000 in prison where as the capacity is only 11,000.

Furthermore, the Minister stated that the vast majority are only remand prisoners whilst only an approximate number of 8000 are convicts. He also pointed out that 90% or more in remand prison are drug addicts and not drug related criminals.

When called for the 2018-2019 statistics from the Government Analyst’s Department, the Minister explained that only 114 cases were in possession of the pure quantity of drugs. He stated that 99% of those who were arrested which is approximately 3300 in number, were only in possession of 2-5g of drugs. Weighing on the gravity of the situation, the Minister explained how large-scale drug criminal cases are stagnated as the High Courts have been clogged by minor cases as mentioned.

Furthermore, Minister Ali Sabry stated that rehabilitating such individuals through community-based correction is important rather than allowing them to mingle with large scale drug criminals paving way for the conversion of a drug victims into a drug related criminal.

State Minister of Prison Management & Prisoners’ Rehabilitation Lohan Ratwatte stated that 250 Acres have been given by the UDA and measures have being taken to relocate the prisons in commercial areas such as the Welikada Prison, Women’s Prison, Magazine New Remand Prison to Horana in order to increase the capacity in 10 folds in comparison to the existing 38.5 Acres in Welikada.

Expressing his views State Minister Susil Premajayantha stated that there is a considerable delay in receiving the Government Analysis Report which causes a delay in Court hearings. The Minister of Justice acknowledged the same and stated that respective measures have been taken towards resolving the matter.

Member of Parliament Weerasumana Weerasinghe stated that it is mandatory to include subjects related to Law, Crime and conviction into the school syllabus as children should be educated on this regard from an early age. State Minister of Education Reforms, Promotion of Open Universities and Distance Learning Susil Premajayantha as well as the Minister of Justice stated that the matter will be looked into and measure will be taken to incorporate legal education to the school curriculum.

The MP also requested to consider the need of having a separate mechanism in the execution of Law when it comes to children as it affects their future and their development into adulthood.

In response to a concern raised by Member of Parliament Gevindu Kumaratunga regarding the attempt to conduct Law College examinations in English as a mandatory requirement, the Minister of Justice explained that such decisions are taken by the Council of Legal Education. The Minister affirmed that the new reform has no effect upon Law entrance examination and it will be held as usual in all 3 languages. Adding to the same, the Minister explained that such measures have been taken to cater to the demands of the field and to improvise on the quality of legal education and practice.