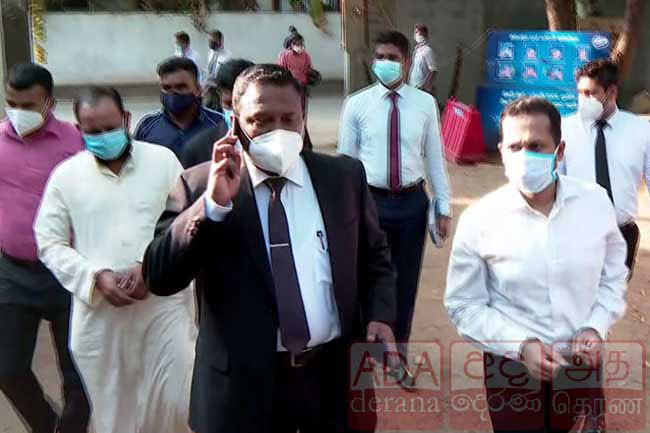 Attorney at Law Hejaaz Hezbullah and principal of the controversial Madrasa school Mohamed Shakeel have been placed under remand custody until March 03.

The duo was brought before the Fort Magistrate Priyantha Liyanage earlier today (February 18).

Deputy Solicitor General Dileep Peiris told the court that the suspect Hejaaz Hizbullah was involved in extremist teachings at the Al Suharia Madrasa in Karativu, Puttalam. He added that the ‘Save the Pearl’ organization, of which Hizbullah was the chairman, had given full support to the relevant Madarasa school which had taught 56 students.

It was also revealed that 26 of these students have been kept in a separate classroom and given special residential training during the period from 2018 to the 2019 Easter attack.

The Deputy Solicitor General revealed that Zahran Hashim and Naufar Moulavi, who is believed to be the theoretician of the terrorist group that carried out the attack, had also visited the school and delivered lectures.

Thereby, the Deputy Solicitor General questioned how suspect Hejaaz Hizbullah, the chairman of ‘Save the Pearl’, the organization which sponsored the school, was unaware that such activities were taking place inside the Madrasa.

According to the Deputy Solicitor General, the suspect, Hejaaz Hizbullah, will be produced before the court under the Prevention of Terrorism Act (PTA) and the International Covenant on Civil and Political Rights (ICCPR) Act and that the Magistrate Court does not have the power to grant bail if a bail application is made on his behalf.

The Attorney at Law representing Hizbullah pointed out that the Magistrate also has no jurisdiction to remand the suspect as he is still on detention orders under the Prevention of Terrorism Act. He further said that his client’s detention order should be terminated if he is to be remanded.

The Attorney General yesterday (17) instructed that the lawyer who had been in the custody of the Criminal Investigation Department (CID) for nearly 10 months be produced before the court.

Based on investigations of the CID, the Attorney General has found Hizbullah a suspect of misconduct or other means of inciting or inciting racist animosity or malicious or hostile feelings between different ethnic groups or ethnic or religious groups under the Prevention of Terrorism Act (PTA).

He was also charged with allegations of incitement of national, religious, or racial hatred, which are compounded by incitement to hostility or violence, as per the International Covenant on Civil and Political Rights (ICCPR) Act.

The Attorney General has directed the Inspector General of Police (IGP) to name Hejaaz Hisbulla a suspect in the aforementioned offenses and obtain a statement from him before producing him before a magistrate’s court.

Meanwhile, the principal of the controversial Madrasa school, Mohamed Shakeel was also arrested yesterday on Attorney General’s orders for abetting and conspiring with Hejaaz Hizbullah.