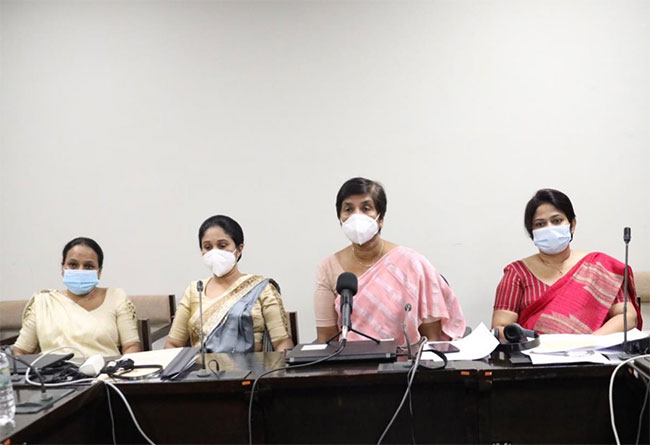 Women Parliamentarians’ Caucus stated that they will stand for the rights and job security of Sri Lanka’s first female DIG Bimshani Jasin Arachchi, setting aside political differences and that they will fight for her rights until justice is done.

The chairperson of the Women Parliamentarians’ Caucus, State Minister of Primary Health Care, Epidemics and COVID-19 Disease Control Dr. Sudarshini Fernandopulle condemned the challenge to the appointment of Bimshani Jasinghearachchi, who was the Director of the Police Children’s and Women’s Bureau.

The State Minister stated this at a media briefing held in Parliament today (18).

The Chairperson pointed out that her caucus was very pleased with the appointment of the female Deputy Inspector General of Police and that it considers the appointment of a woman to a higher post in an institution such as the Sri Lanka Police, where the majority is male, as a contribution to gender equality.

However, while expressing her displeasure over the situation against the DIG of Police, Mrs. Fernandopulle said she believes that if Sri Lankan women were to be recruited into the police, they should have the right to receive their promotions regularly.

The MPs pointed out that being a woman, it is very unfair to try to lose the opportunity to get higher positions in a certain field.

Deputy Chairperson of the Caucus, State Minister of Skills Development, Vocational Education, Research and Innovation Dr. Seetha Arambepola said, that all women parliamentarians, setting aside political differences, condemned the involvement of certain groups in legal action challenging the post of DIG Bimshani Jasinha Arachchi, and urged all women in this country as well as all parents who wish their daughters success, to unite.

Speaking at the event, Deputy Chairperson of the Caucus MP Rohini Wijerathne, said that it was disgusting for the male community in this country to oppose the promotion of Bimshani for performing her duties properly.

The Chairperson further stated that the purpose of the Women Parliamentarians Caucus is to stand for the rights of women in the Legislature. Therefore, the caucus will inform all political parties and encourage them to increase the contribution of women in active politics in the country, she said.

The Women Parliamentarians’ Caucus also has decided to request the Speaker to establish a Parliamentary Committee to inquire the injustice and malpractices taking place against Women in Sri Lanka.

The Supreme Court on Tuesday decided to hear a fundamental rights petition filed seeking the annulment of the promotion of Bimshani Jasin Arachchi to the rank of Deputy Inspector General (DIG).

The petition has been filed by 32 Senior Superintendents of Police (SSP), including SSP Ruwan Gunasekera, seeking a ruling that the promotion was made in violation of the standard promotion procedure.