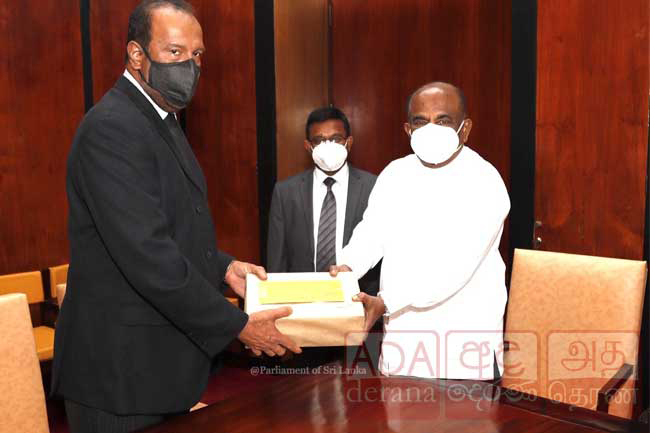 PCoI report on Easter attacks handed over to Speaker

The Presidential Secretariat has handed over the report of Presidential Commission of Inquiry (PCoI) on the Easter Sunday terror attacks to Speaker of Parliament Mahinda Yapa Abeywardene.

On the directive of President Gotabaya Rajapaksa, the Director General (Legal) of the Presidential Secretariat, Mr. Hariguptha Rohanadheera handed over the Presidential Commission report on Easter Sunday attacks to the Speaker today.

The Secretary General of Parliament was also in attendance, the Communications Department said.

Speaker Mahinda Yapa Abeywardena then announced in Parliament that he has received the final report of the PCoI on Easter Sunday attacks and he will table it in Parliament as soon as he receives the copies.

The Speaker further said that he has sent the report to the Library of Parliament for the reference of Members.

The English version of the report and a translated copy in Sinhala were tabled at the meeting of Cabinet of Ministers yesterday.

The report is scheduled to be submitted to the Parliament today (February 23).

The Presidential Commission of Inquiry appointed to investigate the 2019 Easter Sunday terror attacks handed over its final report to President Gotabaya Rajapaksa on February 01.

Hearings and other procedures of the Presidential Commission officially came to a conclusion on January 27, 2021.