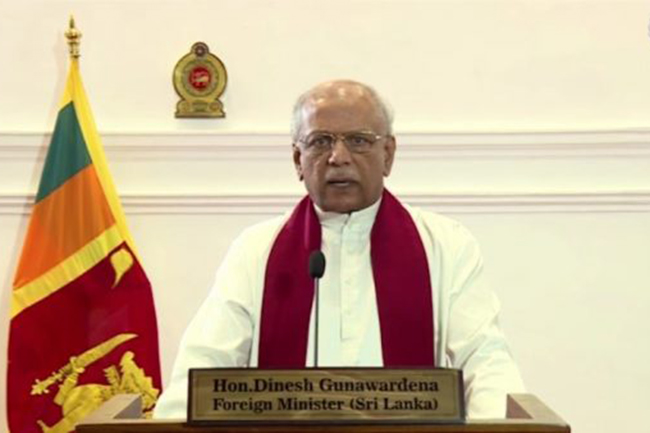 Minister of Foreign Affairs Dinesh Gunawardena has appealed to all member states of the United Nations Human Rights Council (UNHRC) to reject any resolutions against Sri Lanka.

He also said it is regrettable that despite the spirit of cooperation with the HRC and its mechanism, elements working against Sri Lanka intend to table another country-specific resolution based on the OHCHR report.

This report, rejected by Sri Lanka, has “unjustifiably broadened its scope and mandate further”, the minister said adding that it incorporates many issues of governance and matters that are essentially domestic in any self-respecting, sovereign country.

Foreign Affairs Minister’s remarks came during the 46th session of the UNHRC a short while ago. He delivered his speech through video technology.

He urged the UNHRC not to go by unilateral action or one-angled doubtful sources but adhere to its guiding principles.

The extent to which the resources and time of the UNHRC has been utilized on Sri Lanka is unwarranted, the minister said further, adding that it carries a discouraging message to the sovereign states of the global South.

The 46th session of the UNHRC commenced yesterday (February 22) in Geneva, Switzerland, and is scheduled to continue until March 23.

The new resolution comes in line with a recent report published by the Office of the UN High Commissioner for Human Rights (OHCHR) on human rights, reconciliation and accountability in Sri Lanka.

UN Human Rights Commissioner Michelle Bachelet is due to present the relevant report during the session.

Full statement delivered by the Foreign Affairs Minister is produced below:

As I address you today, the Office of the High Commissioner for Human Rights (OHCHR) has published a report on Sri Lanka accompanied by an unprecedented propaganda campaign on that report.

The LTTE is the only terrorist organization in the world which has killed two world leaders: a serving President of Sri Lanka and a former Prime Minister of India extending its terror beyond the borders of Sri Lanka.

End of terrorism guaranteed the most cherished of all human rights - right to life of all Sri Lankans – Sinhala, Tamil, and Muslims.

Nonetheless hegemonic forces colluded against Sri Lanka in bringing an unsubstantiated resolution against Sri Lanka which was defeated by the support of friendly nations who remain by Sri Lanka’s side even today. Further resolutions were presented to this Council on purely political motives. In each instance Sri Lanka presented the procedural improprieties, and how such processes could set a dangerous precedent affecting all member states of the United Nations.

The Government which assumed office in Sri Lanka in 2015, in a manner unprecedented in human rights fora, joined as co-sponsors of Resolution 30/1 which was against our own country. It carried a host of commitments that were not deliverable and were not in conformity with the Constitution of Sri Lanka. This led to the compromising of national security to a point of reviving terrorist acts on Easter Sunday 2019 causing the deaths of hundreds.

We have provided detailed updates to the OHCHR in December 2020 as well as in January 2021 on the progress of implementation of commitments that Sri Lanka had undertaken such as continuity of the existing mechanisms, appointment of a special commission of inquiry headed by a Supreme Court Judge, achieving the SDGs, progress made in returning lands, demining and creating new avenues of livelihoods.

These steps have been taken even as Sri Lanka was battling the effects of the COVID-19 pandemic for the past one year. In spite of these challenges, we held a free and fair general election in August 2020 and elected a new Government with a two-thirds majority in one of Asia’s oldest Parliamentary democracies.

It is regrettable that despite the spirit of cooperation with the HRC and its mechanisms, elements working against Sri Lanka intend to table another country-specific resolution based on this OHCHR Report. This rejected report by Sri Lanka has unjustifiably broadened its scope and mandate further, incorporating many issues of governance and matters that are essentially domestic in any self-respecting, sovereign country.

I leave it to the members and observers of this Council to make their own judgment on whether Sri Lanka represents a situation that warrants the urgent attention of this Council, or if this campaign is essentially a political move that contravenes the very values and principles on which this Council has been established. Particularly at a time when legislation is enacted by some countries to protect their soldiers from prosecution in military operations carried out overseas, only points to duplicity and the hypocritical nature of their motives. This cannot but result in a significant loss of morale among countries engaged in the struggle against terrorism.

The Council must hold the scales even. Not going by hearsay, unilateral action or one-angled doubtful sources but adhere to its guiding principles. Insistence on such ever-expanding externally driven prescriptions notwithstanding our continuous cooperation and engagement with this Council can pose numerous challenges.

As the Council is aware this is a critical time to the entire world in the last hundred years where we need to be united in our efforts to overcome the Covid-19 pandemic and to revive battered economies. I appeal to the members of this Council to take note of our continued engagement and cooperation on its merit and support us by rejecting any resolution against Sri Lanka. We believe that the extent to which the resources and time of this Council has been utilized on Sri Lanka is unwarranted, and carries a discouraging message to the sovereign states of the global South.

The need of the hour, in the face of an unprecedented pandemic, is solidarity rather than rancor and acrimony arising from divisions within this council. In view of the circumstances set out above, we urge that this resolution be rejected by the Council and be brought to closure.