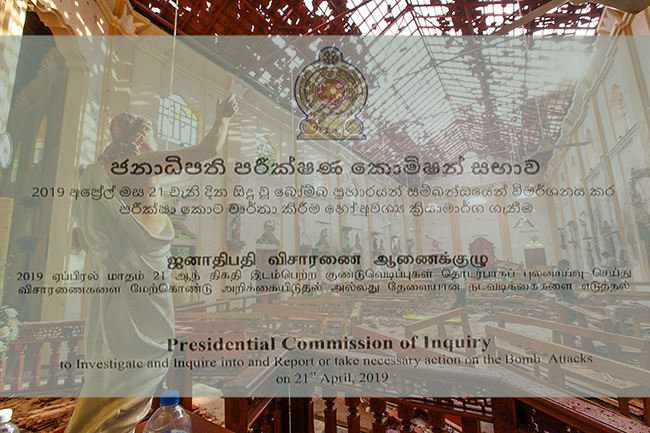 Final report of the Presidential Commission of Inquiry which investigated the Easter Sunday terror attacks was released to the media today (February 23), revealing a long list of accusations against those it holds responsible for the attack through acts of negligence.

However, bearing a large share of the blame for the attacks, former President Maithripala Sirisena was accused by the PCoI for knowingly leaving the country without appointing an Acting Defence Minister, despite being aware of foreign intelligence warnings beforehand.

Meanwhile, a score of former senior officials including the former Defence Secretary Hemasiri Fernando, former IGP Pujith Jayasundara and former heads of national and state intelligence services are also among the accused.

On the 21st of April 2019, Sri Lanka suffered a devastating terror attack on its civilian populace. The attack caused a higher death toll than any of the previous attacks experienced during the 30-year civil war. Suicide bomb attacks on 06 locations, followed by two more had claimed the lives of over 260 individuals including 45 foreigners. Up to 500 others meanwhile sustained critical injuries in the carnage.

As Sri Lanka struggled to come to terms with the attacks, on September 22, 2019, former President Maithripala Sirisena appointed a five-member Commission of Inquiry to investigate the security lapses in the incident and to recommend necessary actions.

The PCoI handed over its final report to President Gotabaya Rajapaksa on February 01. Hearings and other procedures of the Presidential Commission officially came to a conclusion on January 27, 2021.

It also held several senior officials who were serving at the time for failure to foresee the danger of extremists and for their inaction on intelligence received beforehand.

Further, another accusation levelled at them was the lackadaisical attitude towards National Security Council meetings during ex-President Maithripala Sirisena’s tenure as the Defence Minister.

The report points to instances where crucial meeting, traditionally chaired by the Defence Minister and attended by country’s security and intelligence heads, was not held regularly and on some instances not held at all for prolonged periods.

It concluded that such neglect on part of then-Defence Minister in carrying out his duties, created a dangerous situation in the country and that close attention should have been paid to Zahran Hashim’s activities.

It added that former President Sirisena should have ordered intelligence services to launch a special operation to arrest Zahran Hashim based on the information available at the time. However, the failure to do so has greatly damaged the country’s sovereignty.

The PCoI also concluded that after examining facts leading up to the receipt of foreign intelligence alert on April 04, 2019, it was clear that former President has neglected his duties and responsibilities in levels exceeding civil disregard.

Report also revealed that the Commission has concluded that it was evident that former SIS chief’s intention is to absolve the former President of the blame.

It further disclosed that the former head of state has exhibited reluctance to place blame on Nilantha Jayawardena but displayed no such reluctance to former IGP and former Defence Secretary.

The PCoI says after an objective study of the facts leading up to the attacks, it concluded that the former President had been informed of the threat at some point between the 4th and 16th of April 2019.

It went on to note that former President has violated the Constitution by flying to a foreign country without appointing an acting Defence Minister despite being aware of an impending attack.

Presidential Commission has thereby recommended the Attorney General to hold former President Maithripala Sirisena criminally responsible for these shortcomings and to institute criminal proceedings under the appropriate provisions of the Penal Code.

It has also concluded that lax attitude towards Islamic extremism displayed by former Prime Minister Ranil Wickremesinghe was a major fact in then-government’s failure to take decisive action to prevent its rise. This has substantially aided Islamic extremism to grow to the level of carrying out such attacks.

The PCoI meanwhile levelled allegations against former Defence Secretary Hemasiri Fernando for his lack of interest in discussing the foreign intelligence report at the intelligence review meeting on April 09, 2019.

It added that former Defence Secretary’s comment to a foreign journalist after the bombings, which stated that they did not expect an attack to such extent, was clear proof of his failure to perform his duties.

The PCoI also singled out the former Defence Secretary for failing to act responsibly and take affirmative action after receiving the information the day before and despite knowing the date, targets and identities of the suspects.

Report’s recommendation has directed the Attorney General to consider prosecuting former Defence Secretary for negligence under the appropriate provisions of the Penal Code due to his clear criminal liability.

The PCoI went on to accuse former National Intelligence Service Director Sisira Mendis of failing to share the forewarning, received from foreign intelligence on April 04, 2019.

This failure has prevented the exchange of critical intelligence, leading to an opportunity being missed to coordinate all state security resources.

The PCoI has recommended the Attorney General to consider filing criminal charges against the former National Intelligence Service chief under the Penal Code for criminal negligence.

The Attorney General was further recommended to hold former SIS director criminally responsible for the attack.

PCoI has also recommended a complete ban on Wahabism and Thowheed organizations in Sri Lanka. It also urged a ban on Bodu Bala Sena organization.

In addition, legal action has been recommended against General Secretary of Bodu Bala Sena Ven. Galagoda Aththe Gnanasara Thero after studying his speech made in Maharagama on February 27, 2013 and in Aluthgama in June 2014.

The final report has suggested a special High Court be set up to hear all criminal cases pertaining to the Easter attacks.