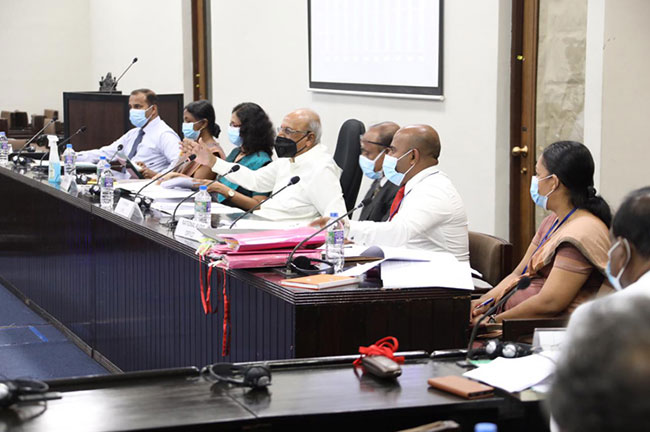 The Committee on Public Accounts (COPA) has directed the Secretary to the Ministry of Wildlife and Forest Conservation and its respective officials to prepare a formal plan in order to expedite the implementation of the recommendations made to resolve the human-elephant conflict which is now a grave concern in Sri Lanka.

Accordingly, the COPA committee directed for a report to be submitted to Parliament within two months, the Communications Department said in a statement.

In addition to the report containing the recommendations of the special committee chaired by Dr. Prithiviraj Fernando appointed by the President to find a solution to the existing human-elephant conflict, which has already been submitted to the President, the COPA committee also called for a review of the National Policy on the Resolution of the Elephant-Human Conflict in 2006 by a panel of experts when preparing the formal plan.

The COPA meeting which was held on the 9th of December 2020, disclosed that Sri Lanka has become a country with the highest number of elephant deaths in the world due to the human-elephant conflict. It was also revealed that Sri Lanka has the second highest number of reported human deaths in the world as a result of the ongoing human-elephant conflict. Therefore, the Committee stressed the need for immediate action with regard to the said concern.

It was pointed out that the Department of Wildlife Conservation cannot be entirely burdened with the responsibility as recommended by the report containing the recommendations of the special committee submitted to the President. It was also emphasized that the construction and maintenance of electric fences should be carried out under the collaborative efforts of the relevant Divisional Secretariats, Agrarian Services Department and the Mahaweli Authority. The recommendations also contain proposals pertaining to a community-based village electric fence and an alternative electrical fencing system only applicable during the periods of cultivation.

Dr. Prithiviraj Fernando an expert in research and experience governing the human – elephant conflict, pointed out that traditional methods of chasing elephants, which is currently in operation, have failed for nearly 50 years.

The committee observed that there are areas with elephant fences which are successfully being implemented with the contribution of the community and the respective local stakeholders, and thus this problem can be minimized by adopting such successful methods in other areas as well.

Officials of the Department of Wildlife Conservation said that programs such as the construction of elephant fences, elephant proof trench digging, building beehives to deter elephants from raiding crops being implemented. While highlighting that the total number of employees in the Department of Wildlife Conservation is close to 1500, it was disclosed that there are many problems when working at the ground level as there is only a very limited number of employees to work on the fencing process.

It was also discussed that there are reports of villagers in some areas refusing to build the fence as it disrupts the boundary of their land and that in some areas there have been reports of theft of the batteries used for the electric fence.

However, the committee emphasized that by educating them the villagers, they too should be involved in the active contribution to the issues including the fencing process. The committee also called for the immediate revival of community organizations such as ‘Gajamithuro’, which are currently inactive. The committee also pointed out that the contribution of all relevant Divisional Secretariats, Grama Niladharis and other stakeholders should be sought for this purpose and highlighted the importance of working more closely with the village community.

The committee pointed out that although there are proposals in policy documents to resolve the human-elephant conflict, they are not being implemented in practice at the grassroots level.

The committee also drew attention to the recommendations not being carried out pertaining to the said issue. The improper construction of elephant reserves and elephant corridors, content pertaining to the issue not being included to the curriculum by the Ministry of Education and the construction of electric fences without proper standards were pointed out the need to execute such matters as soon as possible was also made note of.