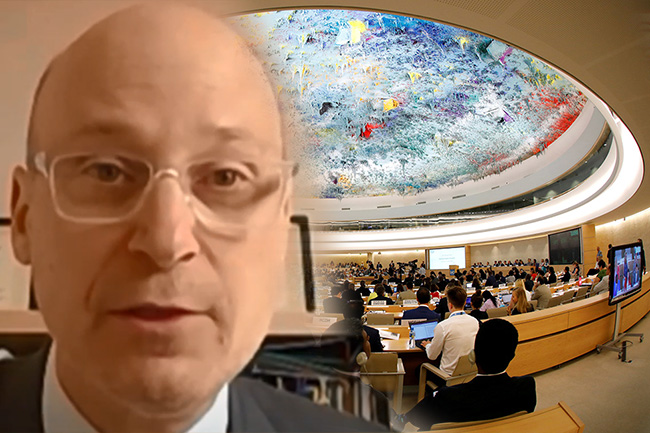 United States has urged Sri Lanka to make public a strategy and timetable for the implementation of recommendations in the report compiled by UN High Commissioner for Human Rights Michelle Bachelet.

Daniel Kronenfeld of the US mission in Geneva informed the UN Human Rights Council that the United States shares the concerns of Office of the United Nations High Commissioner for Human Rights (OHCHR) on Sri Lanka.

His remarks came during the Interactive Dialogue on the High Commissioner’s presentation of Sri Lanka yesterday (February 25).

“We thank High Commissioner Bachelet for her comprehensive report and note the Government of Sri Lanka’s engagement.”

Kronenfeld stressed that the US is concerned by accounts of increasing marginalization of minority communities and shrinking space for civil society, including independent media.

“We remain concerned about the lack of accountability, including high-level appointments of military officials credibly accused of conflict-era abuses,” he went on to say.

The US envoy insisted that Sri Lankan government’s efforts to address concerns raised in OHCHR’s report via a domestic process need to be meaningful and credible. “We note that the Sri Lankan Commission of Inquiry does not include a mandate to pursue accountability, and that the Office of Missing Persons and Office of Reparations need to operate without political interference.”

“We note that respect for the human rights of all Sri Lankans is critical to Sri Lanka’s long-term peace, security and prosperity, and call on the Sri Lankan government to take meaningful, concrete steps to promote accountability, justice, and reconciliation,” he remarked.

During the Interactive Dialogue, 15 countries including the USA, United Kingdom, France, Switzerland, Norway, Canada, Belgium, the Netherlands and Ireland welcomed the recommendations in the UN human rights chief’s report against Sri Lanka.

UK’s Minister for the UN and Human Rights Lord (Tariq) Ahmad of Wimbledon, in his statement, said the UNHRC must continue to consider the situation in Sri Lanka and press for progress on justice, reconciliation and accountability, and improved respect for human rights.

He noted that the UK is concerned over the “increase in surveillance and indeed harassment of civil society actors, the militarisation of these civilian governmental functions, and the impact of the government’s forced cremation policy on different communities in Sri Lanka, particularly the Muslim community, who continue to face persecution.”

However, Sri Lanka was given a rare display of support during the Interactive Dialogue yesterday.

Out of the 38 countries which clarified their stance of the OHCHR’s report, 21 in total voiced their support for Sri Lanka. Among them were China, Russia, Pakistan, Iran, Syria, Cuba, Laos, Vietnam, Philippines, Nicaragua, Eritrea, Cambodia and the Maldives.

Russia and China were supportive of Sri Lanka’s own domestic mechanisms and denounced attempts to interfere with its internal affairs.

China’s Permanent Representative in Geneva Chen Xu noted that it is his government’s policy to stand against politicization and double standards on human rights.

Russia’s Permanent Representative in Geneva Artur Chernyakov said that it acknowledges Sri Lanka’s openness to dialogue tso discuss human rights as well as its readiness to solve its problems.

However, India and Japan revealed a neutral stance, while supporting Sri Lanka’s need to look at its own methods of achieving reconciliation.

Japan recognized Sri Lanka’s efforts to promote reconciliation and the wellbeing of all its people. “Meanwhile, Japan notes the reports of many uninvestigated disappearances and excessive restrictions on human rights in recent years. It is vital that Sri Lanka itself takes actions and introduces and remedies,” Ambassador Ken Okinawa of the Japan’s Permanent Mission in Geneva said.

Indian Ambassador to the UN in Geneva, Indra Mani Pandey said his country’s policy towards Sri Lanka rests on two pillars; the support for Sri Lanka’s unity and territorial integrity and an abiding commitment to aspirations of the Tamils of Sri Lanka for equality, justice, peace and dignity.

“We believe that respecting the rights of the Tamil community, including through meaningful devolution, contributes directly to the unity and integrity of Sri Lanka.”

He also stressed on the full implementation of the 13th amendment to the Constitution of Sri Lanka, which devolves powers to the provinces.