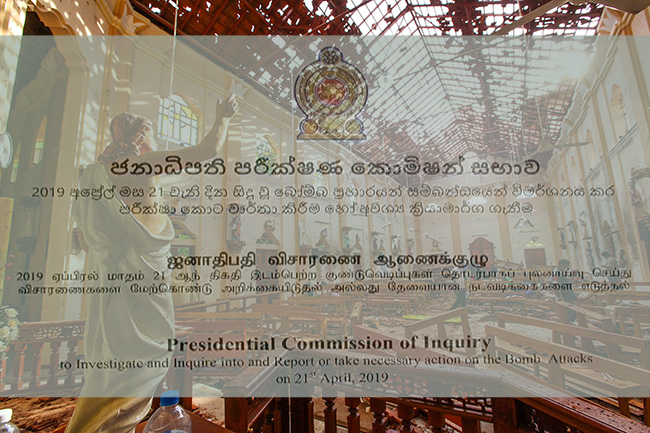 The final report on Easter Sunday attacks compiled by the Presidential Commission of Inquiry (PCoI) has suggested multiple recommendations on extremist organizations and individuals involved in causing ethnic and religious conflict in the country.

It has called for a complete ban on the Wahhabi ideology and organizations that subscribe to it and closer monitoring of Madrasas and Arabic schools as well.

Further, the Commission observed that a criminal case must be considered against Islamic scholar Usthaz Pashid Hajjul Akbar of the Jamaat-e-Islami organization on charges of conspiracy to establish an Islamic State in Sri Lanka.

It further stressed the need for social media and cyberspace regulation to prevent propagation of Islamic State, Wahhabism and Thowheed extremist ideologies in Sri Lanka.

The panel of the PCoI meanwhile recommended the arrest without a warrant of any person involved in inciting ethnic or religious disunity.

Islamic educational institutions such as Madrasas and Arabic colleges must be subjected to strictly government regulation, the final report highlighted, adding that the Ministry of Education should be tasked with monitoring their activities.

In the meantime, all Maulavis and teachers at Madrasas must be registered with an appropriate regulation authority and the flow of foreign funds to them should come under strict regulation, the report recommended.

It read further that the all Sunday schools along with Ahadiya and Thakkiya schools need to be regulated by a single government institution.

The PCoI on Easter attacks also called for religious segregation of schools into Buddhism, Christianity, Hinduism or Islam be discontinued and that all schools be given a new religious syllabus.

In addition, the Commission noted that the concept of ‘one country – one law’ be implemented to prevent any discrimination.