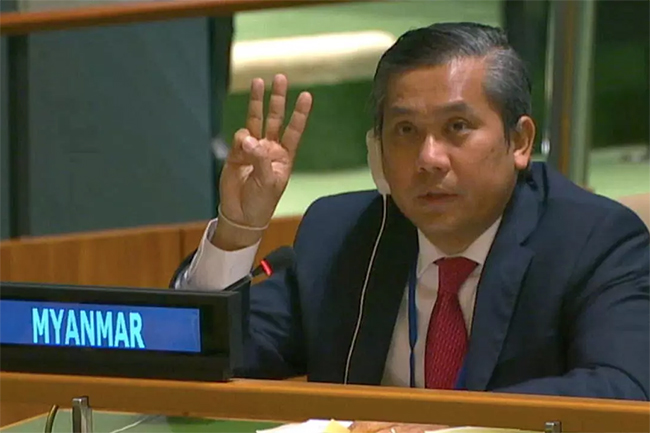 Myanmar’s United Nations ambassador defied the country’s army on Friday and issued an impassioned plea at the UN General Assembly for immediate international action to help overturn the military coup.

Kyaw Moe Tun, remaining loyal to the civilian government ousted on February 1, delivered a dramatic speech while addressing the assembly on Friday.

“We need further strongest possible action from the international community to immediately end the military coup, to stop oppressing the innocent people, to return the state power to the people and to restore the democracy,” he said.

The diplomat received a rare round of applause from his UN colleagues at the end of the speech.

The new US ambassador to the UN, Linda Thomas-Greenfield, praised the envoy’s “courageous” remarks.

“The United States continues to strongly condemn the military coup in Myanmar,” she said Friday, addressing the assembly.

“And we condemn the security forces’ brutal killing of unarmed people.”

Thomas-Greenfield added that the US “will continue to provide life-saving humanitarian assistance, including to Rohingya and other vulnerable populations in Chin, Kachin, Rakhine, and Shan states.”

“The world should applaud the bravery of Representative Kyaw Moe Tun for delivering such a powerful statement on behalf of the people of Myanmar, not the illegitimate military junta,” Akila Radhakrishnan, president of the Global Justice Center, said in a statement Friday.

“The international community must reward such courage by taking up his call for immediate, decisive action to hold the military accountable.”

Suu Kyi has been detained in her house in the capital since the coup.

The country has since seen 21 consecutive days of anti-military protests, with demonstrations held in Mandalay and Yangon on Friday.

Earlier in the day, some protesters gathered peacefully outside Suu Kyi’s house to pray.

Military leaders have imposed an internet curfew as the unrest continues.

On Thursday police officers fired “at least 10 rounds in the air” to break up a crowd of protesters in Yangon, according to sources on the ground.