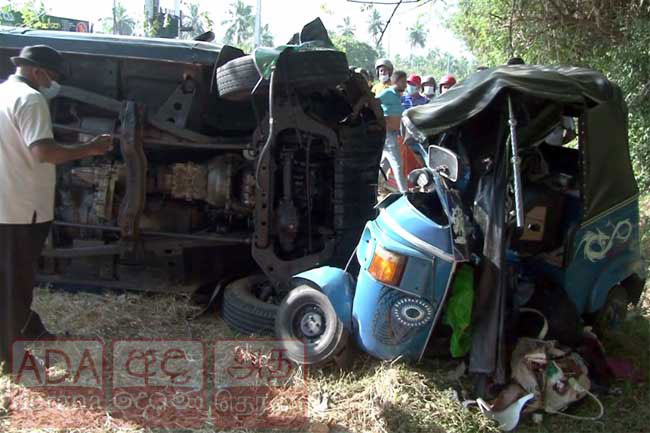 Two members of the same family have been reported dead in a motor accident on the Katupotha Road in Wariyapola this morning (28).

Reportedly, a three-wheeler transporting a family of 5 had collided with a Police jeep near the 10th milepost of the Katupotha Road causing the accident.

The family of parents, grandmother, and two children, from Veyangoda, had been on a pilgrimage to Anuradhapura.

The 40-year-old father and his 69-year-old mother have been killed in the accident, according to Police Media Spokesperson DIG Ajith Rohana.

The 34-year-old wife of the deceased male and the two daughters aged 09 and 13 years have been admitted to the Kurunegala Hospital over critical injuries.

The police jeep belonging to the Katupotha Police had been returning after an arrest of a suspect, the Police said.

The police constable who had been driving the jeep has also been hospitalized over injuries. He is due to be arrested over the incident, DIG Ajith Rohana said.

The Kuliyapitiya Senior Superintendant of Police (SSP) is conducting a special investigation into the incident.