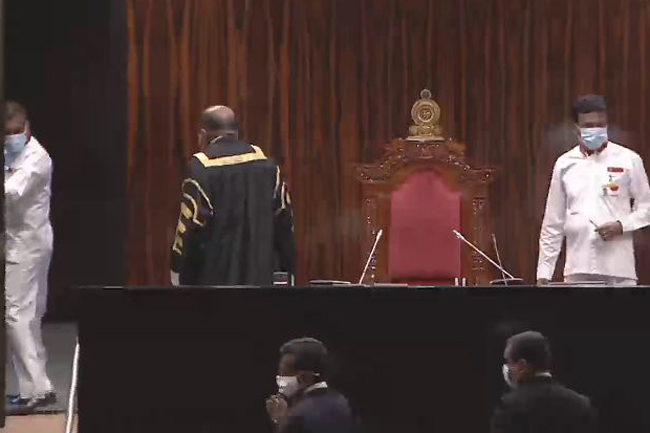 The parliamentary session has been temporarily suspended for five minutes following heated arguments over the imprisonment of Ranjan Ramanayake, says Ada Derana reporter.

Speaker Mahinda Yapa Abeywardena brought to the notice of the House the correct position in respect of the letter that was directed by the Secretary-General of the Parliament to the Chairman of the Election Commission.

The Secretary-General had informed of a vacancy that has emerged in the membership of the 9th Parliament as Ranjan Ramanayake from the electoral district of Gampaha has ceased to be a Member of Parliament in terms of Article 66(D) of the Constitution.

Ramanayake was convicted by the Supreme Court on the 12th of January for the offence of contempt of court punishable under Article 105(3) of the Constitution and was sentenced to a term of four-year rigorous imprisonment.

Following the announcement, the Speaker, expressing regret over the conduct of the parliamentarians during yesterday’s proceedings, urged them to “behave a little more responsibly, with more decent attitude towards the House.”

Speaking up, Opposition Leader Sajith Premadasa requested the House to give Ranjan Ramanayake his due right of contesting the verdict delivered by the Court of Appeal. He added that his fellow SJB member has every right to appeal the decision of the Appeals Court.

He urged the House to ensure that Ramanayake remains a member of a parliament until the appeal process commences and an ultimate verdict is provided by the Supreme Court.

Premadasa also brought up the issue of MP Premalal Jayasekara, who was convicted of murder and later took oaths as a parliamentarian.

In response, Minister Dinesh Gunawardena argued that there were many other parliamentarians who lost their membership as a result of an order by court.

Subsequently, a heated exchange of words ensued between Field Marshal Sarath Fonseka, who said he was in a similar situation as Ramanayake, and Minister Chamal Rajapaksa who was serving as the Speaker of Parliament at the time.