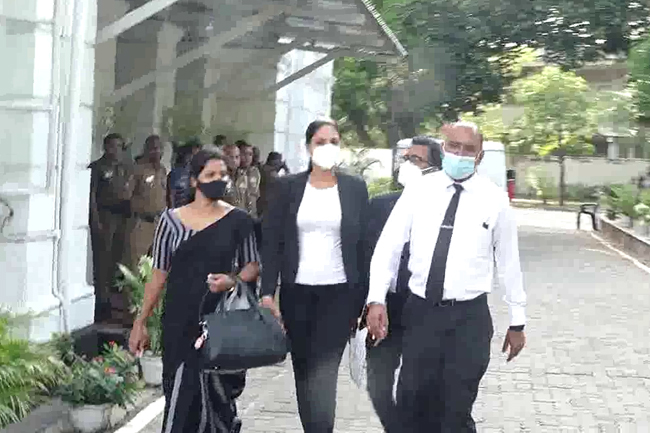 Reigning Mrs. World Caroline Jurie and model Chula Padmendra, who were arrested by the Cinnamon Gardens Police, have been granted police bail.

They were taken into custody this afternoon over the recent controversy at the Mrs. Sri Lanka beauty pageant held at the Nelum Pokuna Theatre on Sunday (April 04).

The arrests have been made on the offenses of simple hurt and criminal force, according to Police Media Spokesperson DIG Ajith Rohana.

The Cinnamon Gardens Police have recorded statements from Jurie and Padmendra before releasing them on police bail.

They have also been informed to appear before the court on April 19, the DIG added.

Mrs. Sri Lanka Pushpika de Silva had lodged a complaint with the Police citing injuries and trauma caused to her during the melee that took place during her crowning.

Accordingly, on April 06, Mrs. World Caroline Julie recorded a statement with the Cinnamon Gardens Police on the incident.

Pushpika de Silva was crowned as the new Mrs. Sri Lanka at the pageant only for the crown to be snatched from her and passed on to the first runner-up over allegations of divorce.

She had later lodged a complaint with the Police that she had to be hospitalized for head injuries from her crown being ripped off.

On Monday (April 05), it was announced that Pushpika de Silva would retain her title as Mrs. Sri Lanka for the year 2021.

The following day, Pushpika de Silva addressed the claims concerning her marital status during a press briefing held in Colombo and stressed that she is not a divorcee.

Meanwhile, Mrs. World Inc, issuing a statement, expressed their regret regarding the behaviour of their current titleholder, Caroline Jurie, and stated that action will be taken on her based on an assessment of the incident at the pageant.