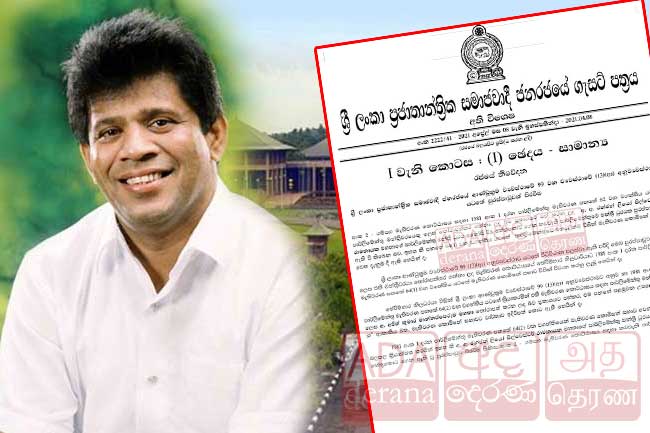 The Extraordinary Gazette notification announcing the appointment of Mr. Ajith Mannapperuma to the parliamentary seat vacated by Ranjan Ramanayake, has been published a short while ago.

The gazette notice states that the Secretary General of Parliament has informed the Election Commission, under Section 64(1) of the Parliamentary Elections Act, No. 1 of 1981, that a vacancy has occurred in the membership of the Ninth Parliament by reason of Mr. Ranjan Ramanayake ceasing to be a Member of Parliament.

“The Returning Officer, for the electoral district which returned the said member was directed by the Election Commission under Section 64(1) of the aforesaid Act to fill this vacancy as provided for under paragraph 13(b) of Article 99 of the Constitution.”

The Returning Officer has made a return to the effect that Mr. A. Ajith Kumara Mannapperuma was declared elected as a Member of Parliament for the said electoral district, it states.

The Elections Commission of Sri Lanka today said that former State Minister Ajith Mannapperuma’s name will be gazette to fill the parliamentary seat vacated by Ranjan Ramanayake, who is currently incarcerated.

Mannapperuma contested the 2020 general election from Samagi Jana Balawegaya (SJB) and came in fifth among the SJB contestants from Gampaha District, securing a total of 47,212 preferential votes.

It was informed to the parliament, yesterday (April 07), that the Secretary-General of the Parliament had notified the Chairman of the Elections Commission of a vacancy which occurred in the membership of the 9th parliament as MP Ranjan Ramanyake ceased to be a member of parliament due to his incarceration.

Thereby, Mannapperuma’s name was set to be gazetted after the District Returning Officer submits it to the Election Commission.

Subsequently, the Chairman of the Elections Commission, today (April 08), stated that the relevant gazette will be issued with Mannapperuma’s name.