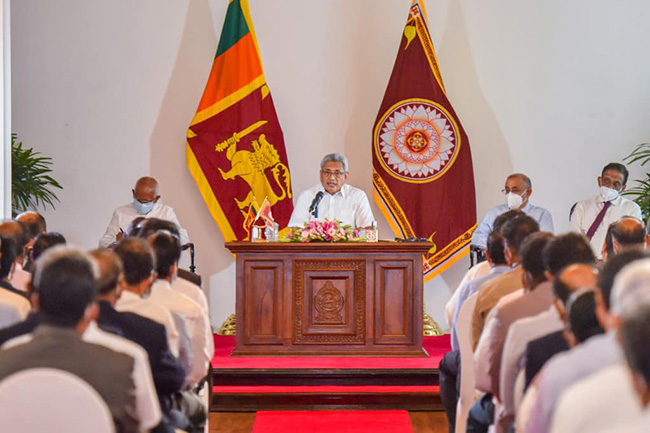 President Gotabaya Rajapaksa has stressed that the importation of chemical fertilizers will be completely stopped in the near future.

The health sector has pointed out that the effects of chemical fertilizers have led to a number of non-communicable diseases, including kidney diseases.

The expenses to treat these patients and the impact on human lives caused by these chemical fertilizers remain high. In order to produce a healthy and productive citizenry, the government must ensure the right of the people to access a non-toxic and balanced diet. President Rajapaksa noted that measures will be taken to ensure that only organic fertilizer would be used in the agriculture sector in the country in the future.

The President made these remarks during a meeting held with the heads of state corporations and statutory boards at the President’s House on Thursday (April 22).

The President highlighted that the annual sum of USD 400 million spent on fertilizer imports could be used to uplift the lives of the people.

The President said that the people expected a change in policy by electing him into the Office, adding that everyone’s support is needed to fulfil those aspirations for the country.

Lanka Sugar Company (Pvt) Limited which incurred continuous losses has made a profit of Rs. 1,100 million following the ban on ethanol imports. The Chairman of Lanka Sugar Company said that about 2,500 employees who were on contract basis for about some 20 years have been made permanent and given promotions and bonuses from the profit.

The Chairpersons pointed out that the President’s programme has helped in transforming many loss-making institutions into profitable ones.

The “Vistas of Prosperity and Splendour” National Policy Framework clearly sets out the goals that the institutions must achieve. The progress that the institutions under the purview of Cabinet and State Ministries have also been clearly enumerated in the National Policy Framework. President Rajapaksa told the chairpersons to work with collective responsibility and commit to achieving the policy change that the people aspired.