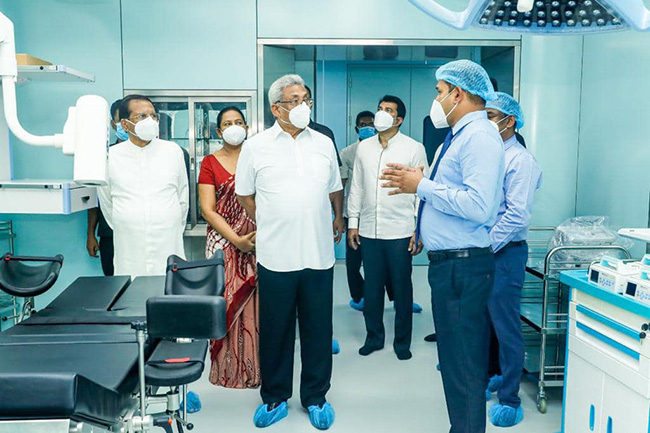 Sri Lanka received the hospital complex as a full grant from the Chinese Government at the request of former President Maithripala Sirisena during his visit to China in 2015, the President’s Media Division (PMD) said in a statement.

The hospital complex spans over an area of 16 acres and has been designed with the influence of ancient architecture of Sri Lanka and China.

Built at a cost of Rs. 12,000 million within 30 months, the hospital consists of five operating theatres with modern facilities for kidney transplants and can accommodate 200 in-house patients. The number of beds in the intensive care unit is 20.

It includes a dialysis unit equipped with 100 machines, a clinic complex for kidney patients, state-of-the- art laboratories, radiation and CT scan services, and a state-of-the-art auditorium. A car park with 300- vehicle capacity and hostel facilities for all the hospital staff have also been designed.

President Gotabaya Rajapaksa unveiled the plaque and inaugurated the hospital complex. During the event, the Director of the Polonnaruwa General Hospital, Dr. M.K. Sampath Indika Kumara, explained the function and the role of the new hospital.

The President and the invitees subsequently inspected the hospital complex including the dialysis unit, the operating theatre and the intensive care unit.