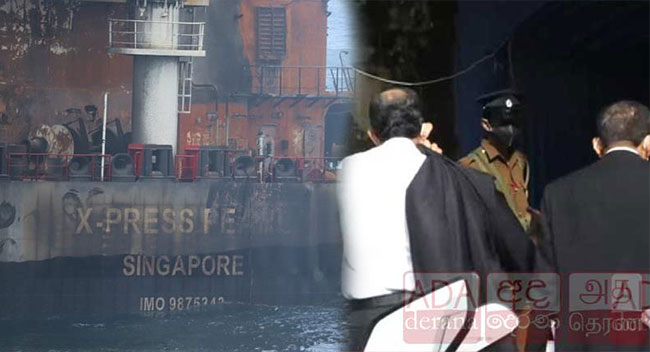 Arjuna Hettiarachchi, the chairman of the local shipping agency representing the ‘X-Press Pearl’ vessel, has been granted bail by the Colombo High Court.

Chairman of Sea Consortium Lanka (Pvt) Ltd, Mr Hettiarachchi was arrested by the Criminal Investigation Department (CID) today after surrendering through his attorneys.

He was subsequently produced before the Colombo High Court Judge Damith Thotawatta, who ordered that the defendant be released on a cash bond of Rs 100,000 and two personal bonds of Rs 1 million each.

Informing of bail conditions, the court ordered that one of the bail bond co-signers should not be a close relative of the accused.

The judge also barred Mr Hettiarachchi from leaving the country and ordered him to handover his passport to the court. He ordered to inform the controller of immigration and emigration as well as all airports and ports of this decision.

The judge further ordered the controller of immigration and emigration to refrain from issuing a new passport to the accused.

Hettiarachchi is charged under the Marine Pollution Protection Act.

Investigations carried out by the CID with regard to the ‘X-Press Pearl’ incident had recently revealed that the local agent had deleted several e-mails exchanged with the vessel’s captain that are vital to the investigations.

Accordingly, it had been determined that the local agency had acted with negligence with regard to the incident, the Police Spokesman DIG Ajith Rohana had said.