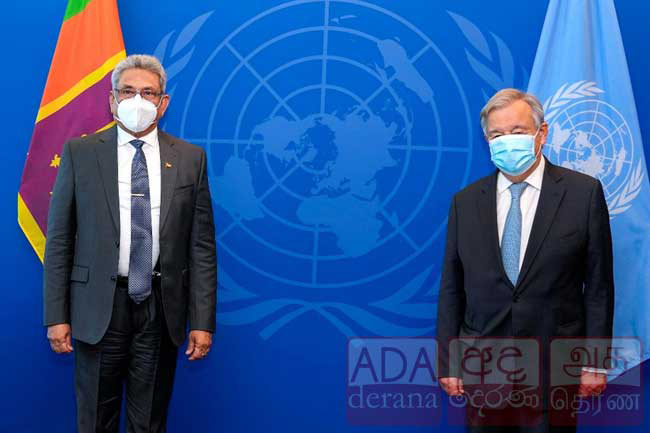 President Gotabaya Rajapaksa has called on the Secretary-General of the United Nations (UN) Antonio Guterres at the UN Headquarters in New York.

Secretary-General Guterres has assured the President the UN will extend its fullest support to Sri Lanka in moving forward to promote unity among communities, the President’s Media Unit said.

The Secretary-General has stated that Sri Lanka, which has a huge social and economic role to play in the Indian Ocean region, is expected to continue to do so despite the complex situation that has plagued the country for nearly 30 years.

President Rajapaksa also briefed the UN Secretary-General on the challenges faced by a country like Sri Lanka with a small economy in the face of the COVID-19 pandemic.

The President spoke at length on the impact of COVID-19 on education and the economy of Sri Lanka and commended the World Health Organization (WHO) for its support in tackling the pandemic.

The President also pointed out that over half of the Sri Lankan population has been fully vaccinated and that all arrangements have been made to fully vaccinate all those over the age of 15 before the end of November as per statistics.

The Secretary-General commended the progress made by Sri Lanka in vaccination.