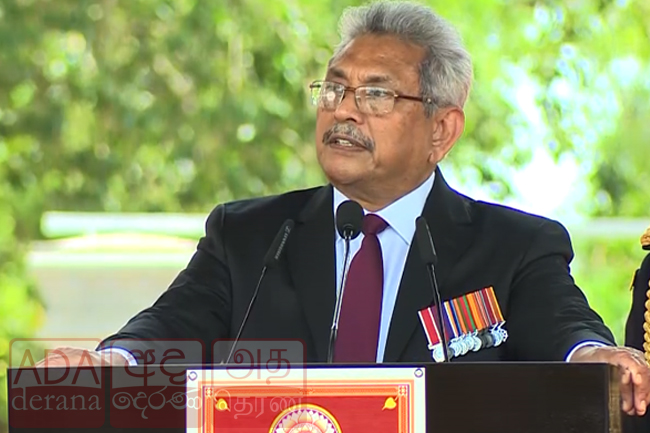 President Gotabaya Rajapaksa today urged all Sri Lankans to extend their support to move the country forward accurately, under the notion of one country and one law without corruption.

“No need to give excuses. Extend your support to move the country forward accurately, under the notion of one country and one law without corruption.”

He stated that economy had fallen due to the COVID-19 pandemic. Nevertheless, a large number of works have been done for the benefit of the people during that period, he said.

He said the armed forces in the world are committed not only to war but also to nation building. He said Sri Lanka’s tri-forces extended their support to the health sector in carrying out the vaccination drive and quarantine process in order to control the spread of COVID-19. President Rajapaksa expressed gratitude to everyone for their commitment in this regard.

The President made these remarks at a ceremony held at the Gajaba Regiment Headquarters, Saliyapura, Anuradhapura, today (10) to mark the 72nd Anniversary of the Sri Lanka Army.

The Sri Lanka Army was established under the Army Act No. 17 of 1949. The Sri Lanka Army consists of 25 infantry, support and service regiments which have played a major role to ensure the security of the country.

President Rajapaksa inaugurated the newly constructed drill ground at the Gajaba Regiment Camp at Saliyapura and handed it over to the war heroes, during the ceremony which was organized adhering to health guidelines.

Later, the President observed the military parade accorded to him.

Over the past two years, national security has been given the priority by uplifting the self-esteem of the three Armed Forces and the Intelligence Services, by properly delegating their respective duties, he said.

The President emphasized that he was committed to protecting the country from any recurrence of acts of terrorism or religious extremism.

The President assured that steps would be taken to amend the Constitution and introduce a new electoral system as promised to the people.

President Rajapaksa said that corruption and fraud would not be tolerated and that all officials should work for the people by making a commitment in this regard.

President Rajapaksa inaugurated the new administrative building and stadium of the Gajaba Regiment Headquarters and laid the foundation stone for the pavilion. The President inspected the quarters of junior and senior rank officers and the military vehicles that had been repaired and put into operation by the Engineering Corps of the Gajaba Regiment.

Army Commander General Shavendra Silva presented a memento to the President marking his visit to the Gajaba Regiment Headquarters.

President Rajapaksa placed a note on the book for the special guests and planted a sapling marking his visit to the Gajaba Regiment Headquarters.